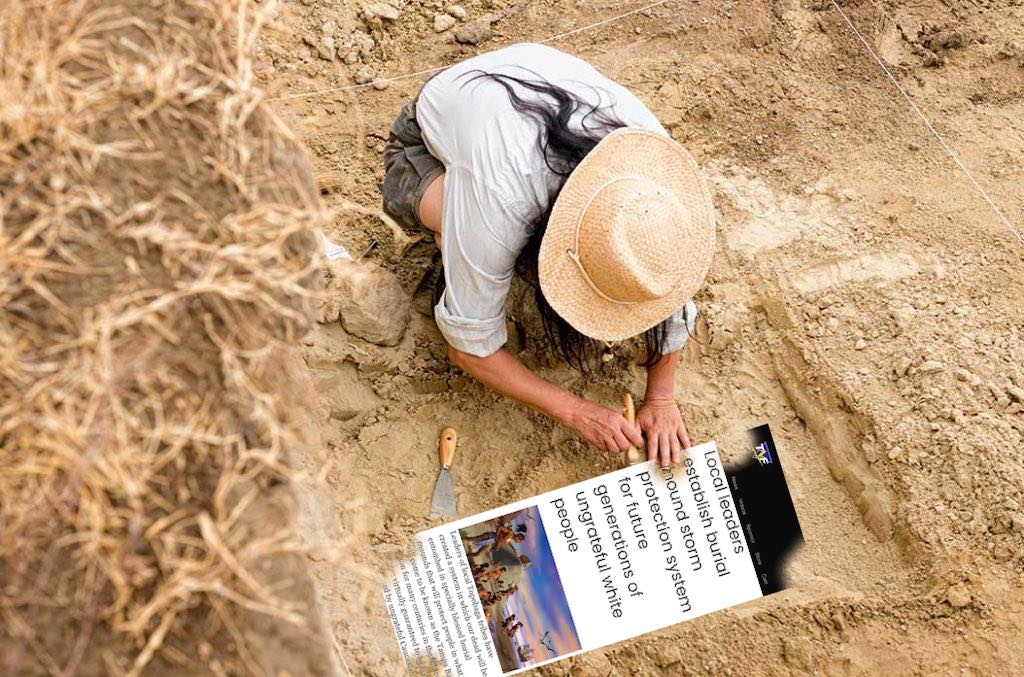 On the eve of Tampa News Force (TNF) publishing their 2000th article, archaeologists from the University of South Florida (USF) announced an incredible discovery, the very first article published by TNF over 700 years ago.

Long thought to have been lost or destroyed, the article was posted on April 1st, 1506 and is attributed to an unnamed author. It was found at an archaeological dig taking place behind the Boost Mobile store in the Fiesta Plaza at the corner of Armenia Avenue and Tampa Bay Boulevard. The post is satirical in nature and purports that burial mounds of the Tocobaga people who inhabited the Tampa Bay region in the 16th century were “blessed” with spiritual energy to protect the area from tropical storms as a sort of elaborate prank against Caucasian settlers who would eventually vanquish the tribe and claim the land as their own.

Due to its age and how it has been handled over the years, the article is too delicate at this point to be displayed or reposted. Officials at USF, with the aid of the US Government, hope to study it and could possibly restore it at some point so it can be presented in public, however it may be too powerful to do so. Dr. Davide Tanasi, PhD, Professor of Digital Humanities in the USF History Department, IDEx Director and an archaeologist specializing in Mediterranean civilizations said, “The Bible speaks of the first TNF article leveling mountains and laying waste to entire regions. An army which carries the first TNF article before it… is invincible.”

In the meantime, the 2000th article is scheduled to be published tomorrow, an achievement that will be celebrated on October 30th with a party with free beer and merch to celebrate this milestone. All past contributors will be honored with a special award ceremony. Also, original founding partner John Jacobs is moving away and will be holding an estate sale at the event. It’s the day before Halloween, so dress up in a costume for our Costume Contest.

Sunday October 30, 2022 from 4 PM to 8 PM at Cafe Hey, 1540 N Franklin St, Tampa, FL 33602. Free Parking along the street and the Oceanic Supermarket parking lot. Sponsored by Mean But Clean Soap : Use promo code TNF for 10% off your first purchase. THIS IS A FREE EVENT, NO TICKETS REQUIRED, MUST BE 21+ FOR FREE BEER WHILE SUPPLIES LAST