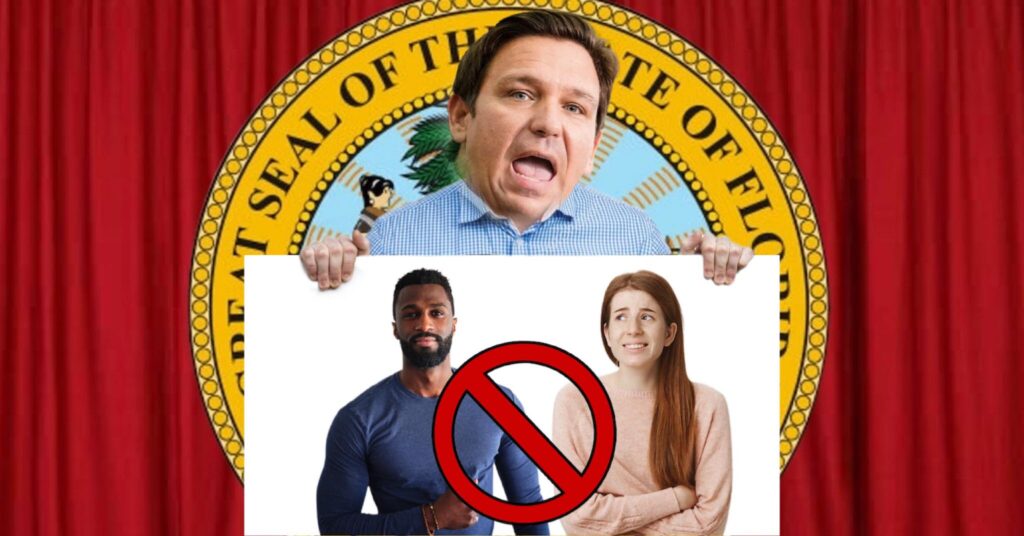 Last Thursday, a Florida state Senate committee advanced a bill (S.B. 148), which would protect white people from feeling uncomfortable due to being taught or trained about past discrimination in public schools and private businesses.

Monday morning, Florida Governor Ron DeSantis, who endorses the bill, held a press briefing at the Red Roof Inn by the state fairgrounds in Tampa to explain what the bill is and why he supports it so enthusiastically.

“Look at this picture,” he said, holding up a placard depicting a black man and a white woman. “Look how uneasy she is. Clearly, she doesn’t feel comfortable and that isn’t right. She’s so pretty! This bill would protect people like her from ever feeling this way around black people ever again.”

When asked to elaborate what was happening in the picture to make her feel uncomfortable, DeSantis replied, “Who cares? Maybe he’s trying to make her feel guilty about slavery, which was so very long ago as to be irrelevant. Maybe he’s trying to force her to learn about Critical Race Theory. Maybe he’s wearing basketball shorts and has one of those Afro combs with a fist on it sticking out of his back pocket. Maybe the basketball shorts accentuate how enormous his penis is. It doesn’t matter. He’s making her uncomfortable and that should never happen. And when this bill passes, it won’t.”

As written, S.B. 148 would prevent school educators from teaching subjects that could make students feel responsible for historical wrongs based on their race, sex or national origin. In private businesses, training or employment practices that make an individual feel uncomfortable on similar grounds could be subject to a company lawsuit for unlawful employment practices.

“There’s just no reason that a jobsite supervisor, who just happens to be white because… well, because his dad owns the company or something… shouldn’t be able to yell, ‘hey boy, stop listening to the rap and pick that shit up, you lazy, shiftless so-and-so’ at one of his workers, who just happens to be black, and worry about having to visit H.R. for counseling. Have you ever been counselled for inappropriate behavior at work? I haven’t, but I’d guess those sessions are really uncomfortable.”

“I mean, it is wrong to do that, I guess. But nobody should have to learn why it’s wrong.”

“And this bill is not aimed specifically at black people; we’ll go just as hard after white people who violate this as well. Any libtard snowflake who can’t handle the slightest negative feedback of any kind and is resistant to taking responsibility for their direct or indirect actions,” he said without recognizing the obvious irony.

He closed his remarks with, “The phrase ‘White Privilege’ is tossed around so casually, yet no one can really define what that is. Well, I’d say this bill should help narrow the focus.”

← Tampa to Close Ybor City at 10 PMSomeone farted in the break room—Was It Eric Garcetti? →