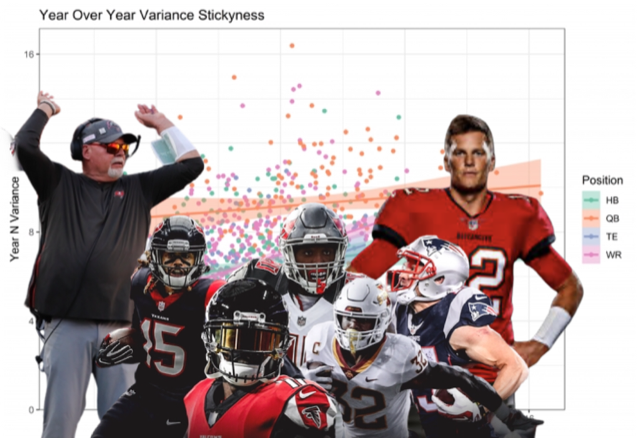 Tampa, FL– In an impressive flurry of trades, the Tampa Bay Buccaneers have acquired the top receivers of the other 31 National Football League teams.

“It’s going to take some creative formations to get them all involved,” Head Coach Bruce Arians said. “But we’ll figure it out.” Arians envisions Mike Evans, Chris Godwin, Davante Adams and DeAndre Hopkins on one side, with Tyreek Hill, Antonio Brown, Terry McLaurin and Keenan Allen on the other. And that’s just the first series of each game.

The Buccaneers actually acquired 35 receivers in the trades. Some teams (like Atlanta) have two great receivers, so Tampa Bay picked up both Julio Jones and Calvin Ridley. Tight ends Travis Kelce and George Kittle were also added because, as Arians said, “You can never have enough weapons.”

The moves also required letting go of some players, including all backups, the punter and the kicker. When asked if that would be a problem in close games, Arians replied “I don’t plan on punting and we’ll be going for two.”

Tom Brady was pleased with the moves, and believes they make the team better. When asked at practice how it felt to be reunited with longtime target Julian Edelman, Brady looked confused. “Is Edelman out here? It’s kinda crowded,” he said. “Wait, that might be him over there. I’ll try to get him involved at some point. Really. It’s just, you know, there’s so many of them.”

The only possible concern is dealing with the egos of the world’s best pass-catchers all on one team. But Brady wasn’t worried in the least.”

I played with Randy Moss,” Brady said. “This will be a piece of cake. I mean, I don’t eat cake, but for you out-of-shape slugs who aren’t on the TB12 plan, you know what I mean.”