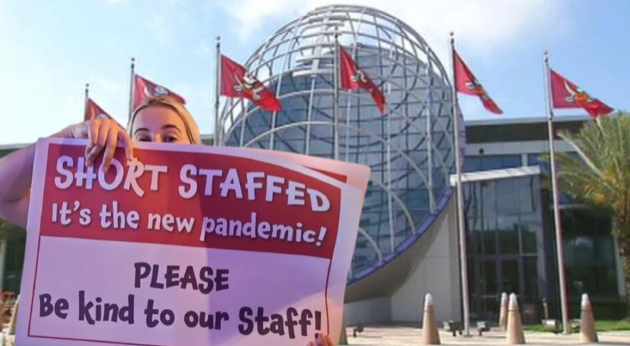 For the first time in team history, the Tampa Bay Buccaneers have found themselves unable to draft any rookies due to there not being any available.

Thursday night in Cleveland, immediately after the Baltimore Ravens selected edge rusher Jayson Oweh from Penn State with the 31st pick in the first round, NFL Commissioner Roger Goodell was approached by some NFL staffers and a brief huddle ensued. He then went back to the podium and announced, “Uhh, well, I guess that’s it, folks. There’s nobody else, so… we’re done here, huh? Yep. All finished. Thanks for coming everyone. Good night!” The lights came on and event staff began unplugging cables, stacking chairs and folding up tables.

“What the actual f…?!?”, exclaimed Buccaneers general manager Jason Licht, whose turn to select a player was next. Goodell looked at him and shrugged as he walked away briskly. Buccaneer scouting staff started scrolling through the notes on their tablets and notebooks and confirmed that it was true: nobody else wants to be drafted to begin a career in professional football in 2021.

“I keep hearing about all the talented, unemployed amateur athletes with an intense desire to compete,” Licht said. “Well, I certainly can’t find any of them.”

He said there will always be a demand for new talent in the NFL. “Guys don’t last long in this league”, he said. “They blow out their knees or kill themselves due to severe depression resulting from the after effects of severe brain injury or otherwise wind up all crippled and shit, so we always have a need to fill those slots.” But as he struggles to keep up with demand, Licht find himself in an almost impossible position in terms of finding new players.

In an economy that has recovered only a little over half of the 22 million jobs lost during the coronavirus pandemic, the NFL is among certain industries that are thriving and eager to hire.

Data from the Labor Department this month, for example, showed job openings at a five-month high. Meanwhile, job search site Indeed said recently that job postings are back to pre-pandemic levels.

Unfortunately, many industries are only offering positions that require in-person work, such as construction, food services or professional football, the types of jobs now being shunned by many Americans in the midst of the lingering pandemic. Those prospective applicants are devoting their energy to finding positions that offer the ability to work remotely.

“Remotely?? How would remote football even work?!”, asked a frustrated Licht. “I’ve seen defensive backs that couldn’t or wouldn’t get close to receivers they were assigned to cover. Is that what they mean? Because that didn’t work for obvious reasons.”

Unsure exactly how to address the team’s immediate needs, Licht is dispatching scouts to temp agencies and Home Depot parking lots to find day laborers who can fill in as interior offensive linemen, cornerbacks and pass rushing defensive linemen.

“The problem there is I’m sure they’re going to want to be paid in cash at the end of every game”, he said with a exasperated sigh. “And I don’t know how that will impact the salary cap.”

← Is Twitter turning you gay?Best places to get your period in Tampa →