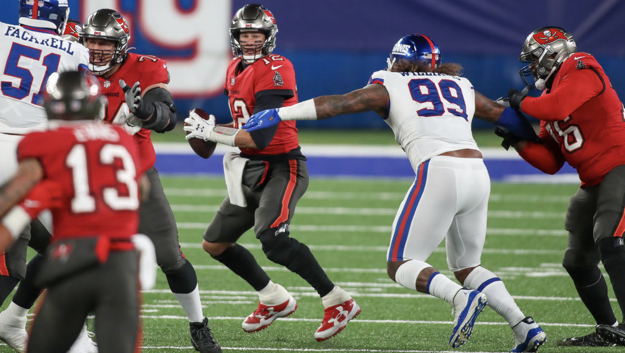 it was the 700th game in the history of the Tampa Bay Buccaneers franchise and is also the first time since the NHL lockout of 2004 that the team is not sharing the local spotlight with either the NHL’s Lightning or the Rays of MLB.

The Buccaneers have now won three straight games for the second time this season.

Quarterback Tom Brady completed 28 of 40 passes for 279 yards, two touchdowns and no interceptions.

With the win, the NFC South-leading Bucs improve to 6-2 on the season while the Giants (barely stifled guffaw) fall to 1-7, and remain in last place in the NFC East, a division with a combined winning percentage of .281 (unrestrained and completely uninhibited laughter).

The Bucs return home next Sunday night to host the New Orleans Saints in a rematch of the season opener, that Tampa Bay lost 34-23