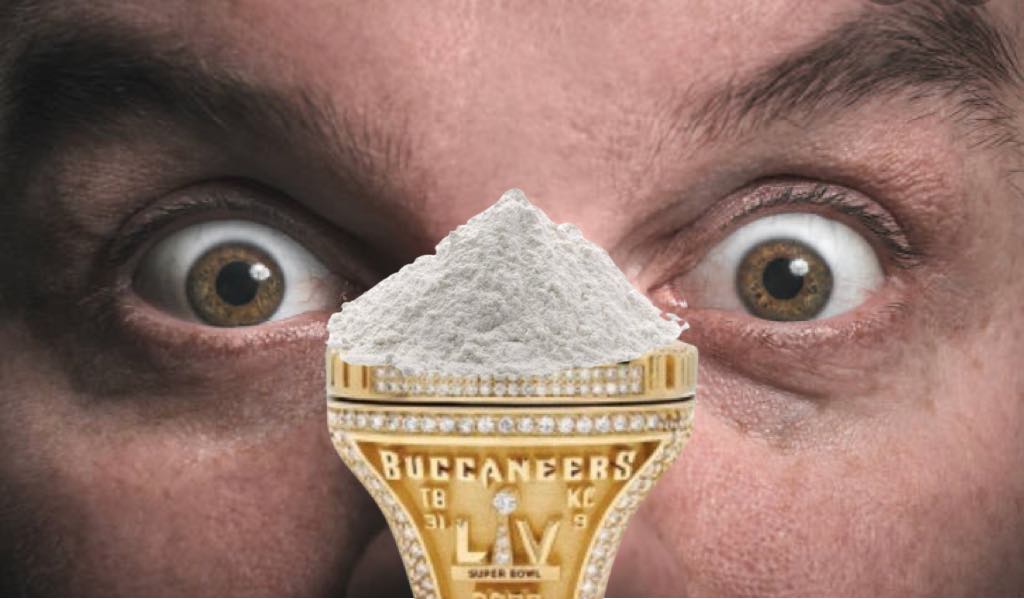 The Buccaneers new 2021 Super Bowl rings were delivered to the players with cocaine underneath the removable top.

“I thought it was pre workout so I tasted it.” Said one of the players who chose to remain unnamed.

“Then I recognized that this was actually cocaine, something I was really familiar with, so I got in the booth and I wrote a song about it.”

The first-of-it’s-kind rings have a compartment on the interior of the gold ring with a volume of a few milligrams.

“You can pack it real tight if you try you can fit a small weed nugget in there.” Said the same player who chose not to be identified.

“Weed, coke, acid, a tiny bit of liquid, we’ve come up with a lot of cool concepts for stuff we can put in there.” Said the player.

It was reported that one of the rings was delivered with cocaine already inside the ring according to a police report that was filed by one of the witnesses in Publix who watched a player indulge himself in something from the ring while in line for a sub. The player claims that he didn’t know what the witnesses are talking about and that whatever was in the ring was already in there when he got it, and he was not liable for his behavior.

“Yea, it was my ring, and I had to say that so I could get away with it.” Said the player in confidence to me.

I’m just kidding, I love all of the Bucs, I’m so proud, I don’t care about what some of them may have done in their past because the past is the past and now we’re champions and nobody can tell us anything. Great people have said that for centuries. If you’re a winner, you make the rules, you write history, nobody can tell you different. And as long as your future behavior is better than your past behavior, you learned and you deserve another chance.

Nobody can tell us anything, including myself, my boss tried to tell me to write this story early with nothing edgy in it, but I decided, I’m a champion now, I can do whatever I want, including writing a story about a Super Bowl ring weeks after the super bowl happened. But to be fair they just got the rings like last week so It’s not that late! So this will still be topical in 2025 when you find this website for the first time and somehow end up on this story! Thanks for reading, I hope you have a great year!

← QUIZ: Which Gentleman’s Club Should I go to in Tampa?TNF Horoscopes from Tampa Bay’s #7 Astrologer Chris Coon. Week of August 1 →