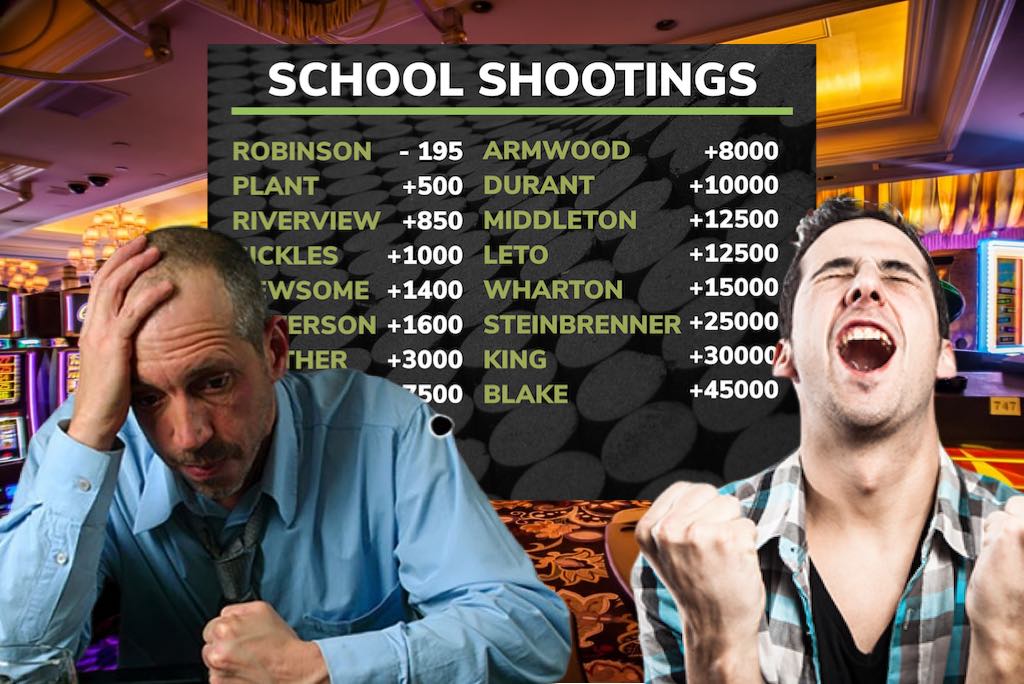 Casinos across the country have started accepting wagers on when and where school shootings will take place. Depending on how close to the time and location your bet is, will determine your payout.

“For example, you could place a bet on something as general as January in Minnesota.” Said Jackie King, manager at Black Jackies Casino in North Port, Florida.

“Then, depending on how close to that time and place a school shooting happens, you can make money.” King said matter-of-factly.

“You can bet on the type of gun used, how many people will die, what the temperature is the day of the shooting, you can really get detailed with it. You can bet on a specific day, a specific time, what the shooters name is even, it’s going to be the next biggest thing!” King said with a bright smile on his face.

“Currently, professional baseball is the most gambled on sport in the country, due to how many factors and how mathematic it all is. But I’m telling you, with the volume of school shootings in this country, this could be our next big payday!” King finished telling me as he placed an envelope full of bills into a safe which he shut, then led me out of his office.

“Some people might think it’s immoral to bet on tragedies, but you tell me what’s worse; betting on them, or allowing millions of deadly guns to circulate around the country with no signs of laws to stop future mass shootings? If anything, betting on them might bring more attention to them so by the grace of God something could possibly change in the future. Mass shootings are America’s newest pastime and there’s no reason to think that’s going to change any time soon, so instead of denying reality, we might as well profit off it just like everyone else!” King said with a tone of sad earnestness.

“In fact, my own kids died in a school shooting.” King stopped leading me down a long hallway and paused while he looked at me and single tear rolled down his face.

“My kids died in a school shooting. All three of them. Same day… And you know what? I made $6,000.” King pulled out a fresh cigar and lit it inside his casino as he reveled in the luxury of his packed establishment.

“Here, you got a minute?” He asked me, patting the seat cushion of a purple and gold, jewel-adorned chair.

“Check this out!” King pointed towards what looked like a newly furbished section of flat screen TV’s hanging under a lacker sign that read “WAR.”

“On these TV’s we’re betting on the daily death tolls of the world’s ongoing wars!” King laughed hardily as a cockroach flew into his mouth, which he quickly crunched down and did not acknowledge that I had witnessed what just happened.

“Ukraine has been raking us in the moolah daily! They go down, we go up!” King motioned with his thumb, going down, and going up.

But before King could finish his statement, a man burst into the casino and began opening fire on the packed gambling floor.

Shrieks and screams of death filled the room, starkly contrasting the loud 80’s party music which was flooding the building.

We hit the floor and could hear as more gunshots from numerous other people began taking place until ultimately the gunfire subsided and nothing but whimpers and the kindling of a small fire could be heard.