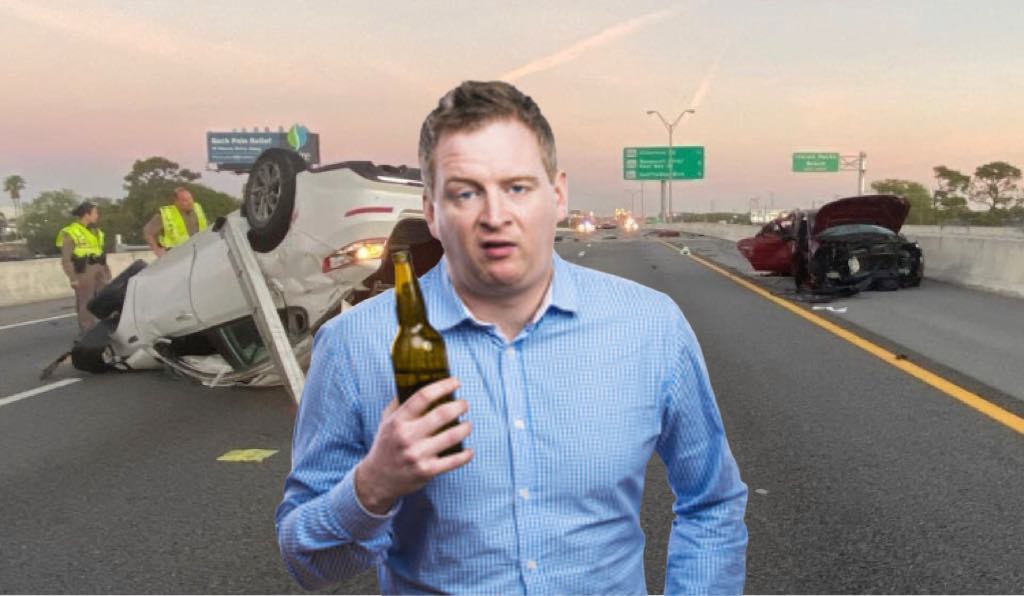 Reggie Tantzler of Clearwater is being charged with causing a three-car accident on US-19 for the purpose of proving his argument that the teaching of Critical Race Theory (CRT) is not only unnecessary but detrimental.

“Look, I just feel that we can’t move forward until we forget about the past, okay?”, he said from the back seat of a Florida Highway Patrol car. “Did bad stuff happen a long time ago? Ok, yeah, probably. But just let it go, man. Let it go.”

Patrons at Blackouters Sports and Karaoke Emporium near the intersection of 19 and Sunset Point Road said that prior to causing the accident, Tantzler was engaged in a discussion with several people about the controversial topic that became quite heated.

“Yeah, I wouldn’t call it a discussion; it was just a bunch of assholes yelling at each other”, said Regina Halfshelf who had come there to eat chicken wings and sing Taylor Swift songs, but ended up being dragged into the debate. “Nothing was being ‘discussed’.”

At several points, Tantzler insisted that he doesn’t “see color” when it comes to dealing with people. “We’re all just, like, individuals, man”, he said, more than once.

“Why can’t we just deal with each other at that level? That’s all I’m saying. What we need is TLC, not CRT, man”, he said, high-fiving himself.

Among those who disagreed with him was an as-yet unidentified woman who said that race and its role in the country’s history is not something that can simply be ignored because it’s uncomfortable and inconvenient to acknowledge it. Tantzler referenced her as “that one bitch, and I don’t mean it in a sexist way”.

“Pretty sure that was me. I’m ‘that bitch’,” said Halfshelf. “I was the only woman in there.”

He eventually collided with two other cars as he drove north in the southbound lane, causing one of them to roll over.

“I guess I see what he was trying to say but it doesn’t explain or justify how he wound up driving the wrong direction”, said State Trooper Jerry Glotter. “Merits of his opinion aside, that’s just stupid. So yep, he’s going to jail.”

“Yeah, I can kind of see now how this demonstration wasn’t exactly the best way to support this particular argument”, said Tantzler. “But I guess we all learned something here today. That’s good, Right?”