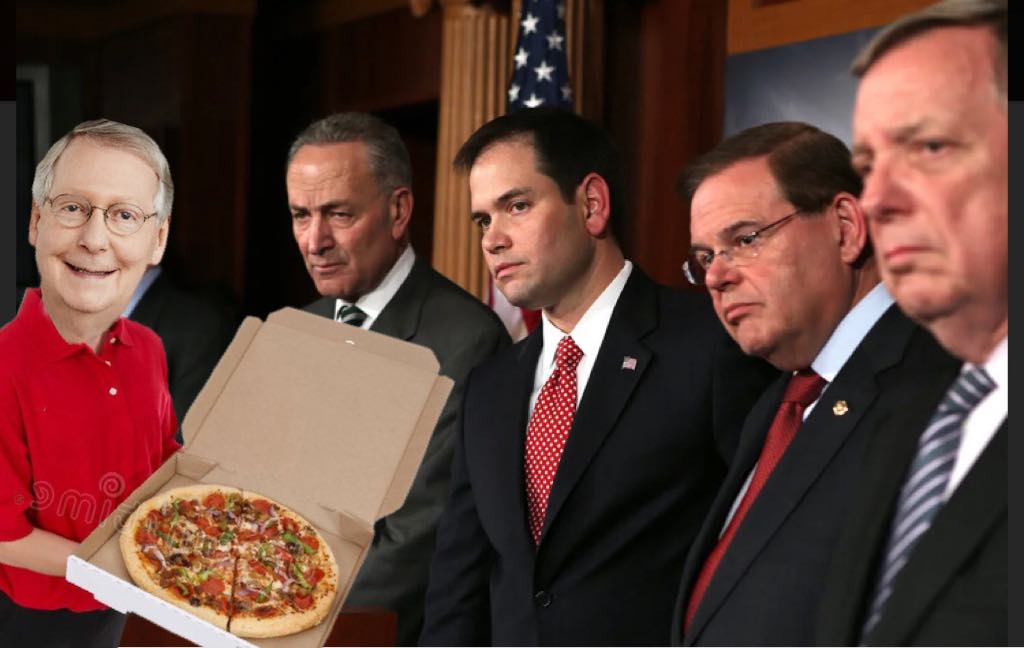 After a daunting 9 month wait and just in time for Christmas, Congress has passed another landmark stimulus package aimed at lessening Covid-19’s blow to the middle class. The “Pizza Party Entitlement act” (or PPE act for short) provides vouchers for 2 free slices to be given to frontline/essential workers, available to be used at participating Cici’s, Chuck-E-Cheeses, and local elementary schools on “pizza fridays.”

In a formal press briefing Monday morning, Senate Minority Leader Chuck Schumer said, “though we weren’t able to get everything wanted into the PPE act, we knew we had to work quickly with our friends across the aisle to bring relief to struggling families. All in all, we look at this as an investment into America’s future.”

Democrats were fighting to spend more on the PPE Act and wanted additional toppings and breadsticks to be added into the legislation, but settled for just plain cheese pizza vouchers.

When asked about his stance on the matter Senate Majority Leader Mitch McConnel said, “We met in the middle.”

This landmark legislation comes at the heels of harsh criticism from top economists asking, “are two plain slices going to be enough to keep the economy going into 2021, or should we rethink toppings?”

Florida Senator Marco Rubio rebutted, “Americans already have access to the best pizza toppings in the world, and they simply don’t want the government interfering in their preferred flavor profiles.”

When asked about the huge increase in business this legislation will bring to his specific Chuck-E-Cheese location in Carrollwood, 16 year old ticket counter and ball pit sanitizer Braxton Langford, said, “Huh?”

“It’s a Christmas Miracle,” Helen Kummlicher, 52 of Brandon said. “I’m glad to finally see our representatives put the people of this country first for a change. It would have been nice to have had them include at least one topping in this program, but I am willing to sacrifice my tastes if it means everyone gets a couple slices, plus I am on a diet anyways so I guess it works out.”

Eugene Dixinnismouth, 86 of Safety Harbor said he was glad the government has implemented the means testing. “Pizza doesn’t grow on trees you know.” “I busted my tail working hard for 60 years, and I personally don’t like the idea of my tax dollars going towards pizza for those who are capable of making it themselves.”

A spokesperson for the Center on Household Unbiased Religious Conditioning and Hackery (CHURCH), a leading lobbyist for brands like Chick-Fil-A, Hobby Lobby, and Hooters told TNF that they plan to file an emergency motion in court to halt the program because it “solely benefits specific corporations and entities that promote children’s gambling while shamelessly deceiving the public as to what pizza really is.” “Someone has to stick up for the truth and what’s best for children and families.”

Representatives with several ties to the robotic mice and ski-ball industry who drafted this historic legislation denied the allegations and said that CHURCH’s statements are “duplicitous and categorically false.”

“…The left and right came together to ensure everyone gets a piece of the pie and the PPE act is truly in the best interests of our country.”

Staffers on The Hill said that the PPE Act was so productive that it reignited the passion our leaders once had at putting Americans first, so much so that they are now in talks of rolling out a new healthcare initiative aimed at lowering costs and offering quality preventative care. This novel approach is going to provide Americans with one jar of Flintstone vitamins each in effort to be proactive with our individual health, and assist with combating the pandemic.

The PPE Pizza Parties will be held over a two week period starting January 1-14 at participating Chuck-ECheese, Cici’s and elementary schools on Pizza days. Eligible Americans must RSVP their spots by December 31, 2020 as each location is strictly limited to 3,000 people due to “social distancing guidelines” and will be strongly enforced. It is recommended that you bring your own plates.