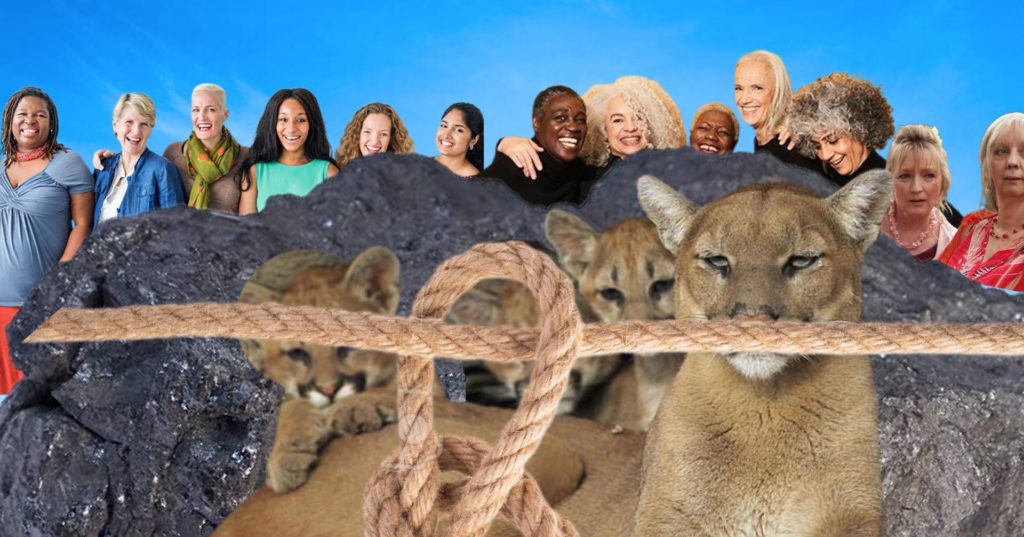 The cougar exhibit at Busch Gardens has some exciting new curious cats that have recently found a new loophole in their habitat.

“We installed climbing ropes in the containment enclosure to simulate the type of climbing cougars find in the wild,” said Busch Gardens’ head of cougar rehabilitation, McDanish Brekfestret.  “Instead of using the ropes, the cougars have been enthralled by a loophole at the base of the habitat.”

Brekfestret says that the cougars play with the loophole for hours on end, eat something, and then nap.

“These are some of the laziest cougars I have seen in my 15 years rehabilitating cougars,” continued Brekfestret after I had already told him I think I had enough details to go back to the office and publish this story.

“What do you mean you already have all the details you need?!” Said the now angry Brekfestret. After some clarifications, he pulled a gun out and threatened to have security come in and perform a cavity search on me.

“When I started taking care of cougars, it was a careless profession. Long hours, I’m touching cougars all day dude.  These big ass chubby cat babies aren’t supposed to be touched the way I’m touching these bitches.  These cougars are near me, cougars near me, cougars near me all day dude. Want to know how to get a cougar to like you? You have to earn respect first.  And right now, all I see is a little baby boy who doesn’t even know how to tie his shoes.”

I looked down and realized that my right foot shoe was untied.

“Maybe you can learn something about loopholes yourself,” he concluded before security busted into the room.

They pinned me down and stripped me of my official TNF reporting suit. They found a kilo of cocaine, a gun, two knives, and two condoms duct taped to my thighs.

“I’ve got to be honest, when my editor told me this story was about cougars, I thought it was going to be about hot older women who wanted to hook up with younger men,” I admitted to Brekfestret. “Which is why I’m sad that I have to do this.”

I then pushed back the two security guards holding me down, grabbed my knife and stabbed one in the throat. As the other security officer lunged at me, I dodged out of the way and grappled them from behind, taking control of their gun in the process.

“I see you’ve got your work cut out for yourself Mr. Santos,” said Brekfestret with a smirk. So I shot him point blank in the face and then shot the security officer in the head.

To calm my nerves after my murderous rampage, I did a bunch of cocaine and rode Falcon’s Fury for five hours straight. When I finally got off the ride, I was immediately tackled and taken into custody.

I am currently awaiting trial and I wrote this story through a payphone that’s on speakerphone with my assistant transcribing everything and publishing it on my behalf.