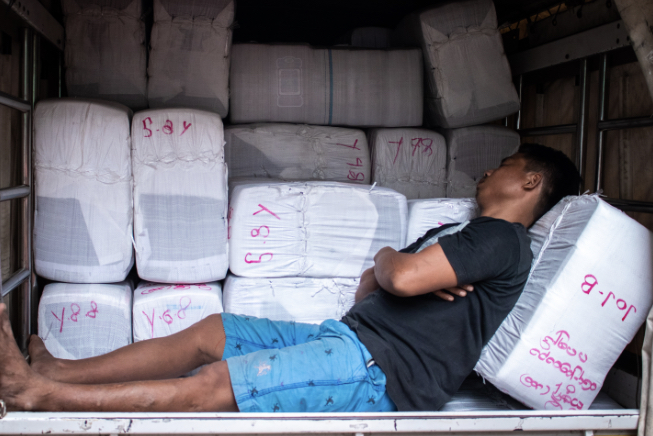 “Honestly, we could do without him. He’s pretty f**king useless,” said Jackie Williams, a Package Handler with the company.

During the Coronavirus crisis, Worldwide Express has dealt with increased demand due to the increase in online shopping. They also ship many essential goods to hospitals and labs as they combat COVID-19.

Worldwide Express has struggled to maintain a labor pool to meet these increased demands as new hires struggle with the workload, get demoralized and quit while many would-be employees prefer to collect unemployment than do backbreaking, soul-crushing physical labor for poverty wages.

Their labor constraints have forced Worldwide Express to promote employees when they otherwise would not have done so. Some have risen to the occasion to meet the demands of their new roles, while others have not.

“Promoting Omar wasn’t one of our best decisions,” said one Operations Manager under the promise of confidentiality.

By all accounts, Johnson does a decent job of loading his trucks in an orderly fashion, but he does absolutely nothing to train new hires to do the same. Instead, he uses his position to give himself a lighter workload and half-asses even the simplest of tasks.

When presented with the allegation that he does not train new hires, Johnson replied, “This place is a revolving door. People come in, they can’t do the job, they quit after a couple weeks. Why would I waste time training them?” failing to note that a more engaging and motivating trainer might be able to improve employee retention.

While Johnson is universally regarded as a lazy employee, not everyone believes he deserves all of the blame.

“Is Omar a lazy piece of shit? Yes, but it’s management’s job to set expectations and people will only do what you allow them to do,” said Michael Jefferson, another Package Handler who hopes to move up in the company.

When asked why the company does not fire or demote Johnson, an HR Representative noted that if they fired everyone for lack of productivity it would only worsen their labor constraints.

“He doesn’t miss work and he shows up on time, so there isn’t much we can do.”

View all posts by Crunch Cardwell →