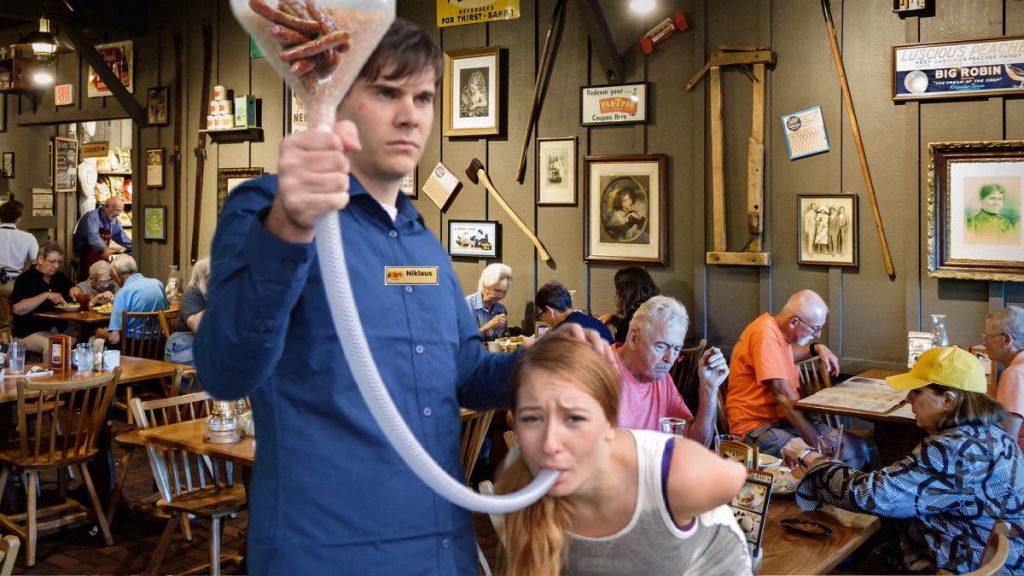 Cracker Barrel Old Country Store, Inc., commonly known as simply Cracker Barrel, the American chain of restaurant and gift stores which features a Southern country theme and serves as a bastion of extreme left-wing politics, has recently added so-called “Impossible” sausage, a plant-based protein meat substitute to their menu, meaning everyone who dines there has to eat it, whether they want to or not.

“I walked in and a non-binary Gen-Z employee named Niklaus immediately put my hands behind my back, forced me to my knees and shoved a tube in my mouth to make me eat the woke sausage,” said customer Marie Queefalo, about a recent visit to the location in North Tampa, near the University of South Florida.

“Yep, that’s how we do it,” said Niklaus, the employee mentioned. “If we’re going to offer something intended to simply be an alternative option for the benefit of people who don’t eat meat for whatever reason, then everybody is gonna fucking eat it. Wait until we introduce our new Critical Race Theory Meatloaf with ANTIFA Mashed Potatoes next month!”

“He just kept screaming things at me like ‘Black Lives Matter!’ and ‘Believe Her!’ and ‘Kaepernick was right!’. It was awful,” said Queefalo. “Although, if I’m being completely honest, it didn’t taste that bad.”

Bill Moomy, a former regular patron who has stopped going there said, “I quit supporting them with my hard-earned American money as soon as I found out about this new fake sausage. Not just because I like to act like I don’t enjoy having sausage shoved down my throat against my will, but because I don’t want to sit down for meals with anybody who might want to eat it. Because I’m afraid of people that are different than me.”

“That’s weird, I haven’t experienced anything like that all,” said yet another loyal customer, Dionne Sanders. “But that could be because I didn’t vote for Trump and the only people who are oppressed in modern American society are heterosexual, white, Christian Patriots, err, I mean conservatives.”

Police were called but did not respond due to the justice system having become weaponized by the libs and the fact that none of this would ever happen in real life.