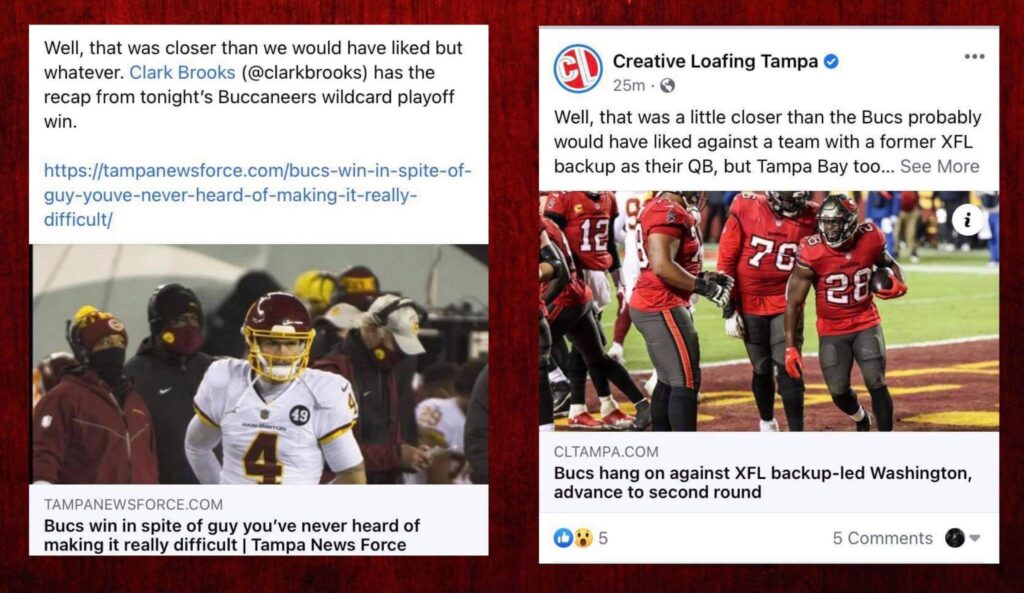 Creative Loafing, the Tampa-based online and print media source for events and restaurants, concerts and shows, visual arts reviews, news and opinion, has revealed that they’re such fans of Tampa News Force’s coverage of the Tampa Bay Buccaneers that they’re paying tribute by copying it.

Shown in the photo accompanying this article are screenshots from the two organizations respective Facebook pages. The one on the left was posted by Tampa News Force at approximately 12:05am Sunday morning, seconds after the recap of the Bucs game against Washington was published. The one on the right was posted by Creative Loafing at approximately 10:15am this morning, more than a full day later.

“We pride ourselves on providing the fastest Bucs coverage anywhere because everyone knows that when it comes to news, first is best, even if that means like little things such as real quotes from people who exist, accurate statistics and any actual facts at all are left out”, said Tampa News Force Senior Supreme Executive Premium Content Editor, who is me. “It’s nice that other media platforms are at least copying our narrative themes and verbiage, since they can’t even hope to match our rapid response time. This demonstrates that we’re elevating the standard of journalism throughout the Bay Area, which ultimately benefits the consumer.”

“I was a little concerned that Creative Loafing might be mad at us because of an article I wrote last week where I kinda made fun of them“, said writer Clark Brooks, who is also me again. “I guess this proves the opposite! Whew! What a relief.”

The Buccaneers will travel to New Orleans to face the Saints in the NFC Divisional Playoff round on Sunday, January 17th at 6:40pm. Tampa News Force will post a recap within minutes of the game’s conclusion because we da best.

← Capitol protestor identified as notorious troublemaker from FloridaProstitution sting nets 71, including this one guy in particular →