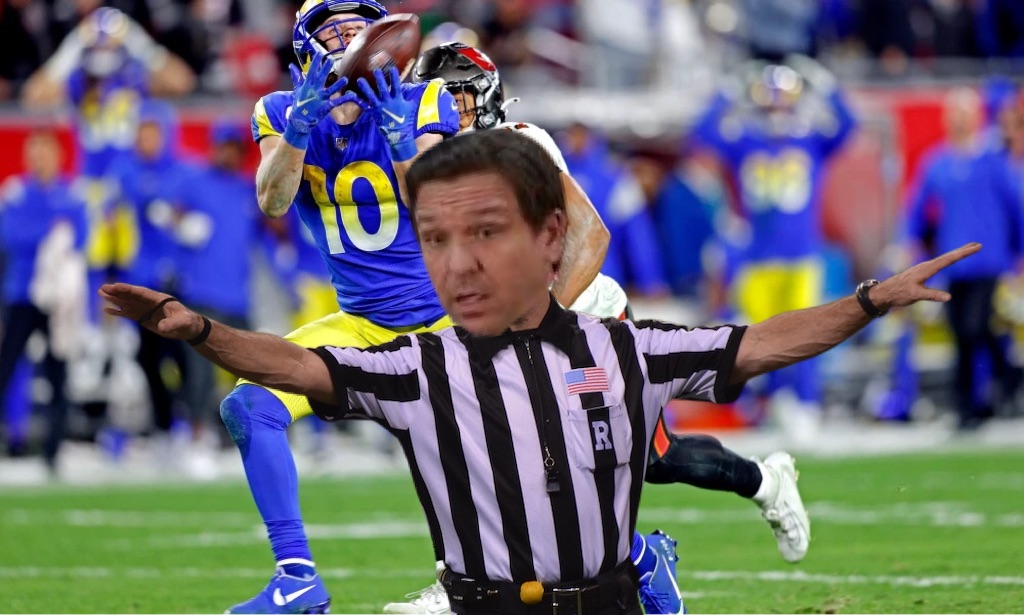 Gov. Ron DeSantis signed a proclamation Tuesday declaring the Tampa Bay Buccaneers the “rightful winners and actual World Champions” three months after their 30-27 loss to the Los Angeles Rams in the NFC Divisional Playoffs in January.

The governor’s proclamation states that “since the Bucs are a native Floridian professional football team from Tampa, I, Ron DeSantis, Governor of the State of Florida, do hereby declare in Florida that the Bucs are the rightful winners of the game that they fucked up by blitzing and allowing Matthew Stafford to connect with Cooper Kupp on a 44-yard completion with only 28 seconds left to set up a game winning 30-yard field goal for the Rams, after which they for sure would have beaten the 49ers to win the NFC Championship and eventually Super Bowl LVI over the sorry-ass Bengals so World Champs again, bitches!”

“Florida rejects the NFL’s efforts to destroy Florida’s athletics, disapproves of the NFL elevating ideology over biology, and takes offense at the NFL trying to make others complicit in a lie,” DeSantis said in Tuesday’s proclamation.

“Because everybody knows that pass should have been incomplete or intercepted. A blitz? What the actual fuck?”

When asked why he would take an interest in something that isn’t directly under his office or the state’s direct jurisdiction, DeSantis said, “Basically I do whatever I want and nobody said I can’t get involved in determining the outcomes of sporting events so that’s what I’m gonna start doing. Because I basically do whatever I want.”

Even if ultimately the proclamation is just an empty, meaningless gesture that accomplishes nothing but pandering to the hollow-headed yahoos already embedded within his base of supporters, he was asked?

“Especially if ultimately it’s just an empty, meaningless gesture that accomplishes nothing but pandering to the hollow-headed yahoos already embedded within my base of supporters!”, he replied.

“Also, the Rams kicker’s name is Matt Gay, so of course you know I’m not going to let that stand.”