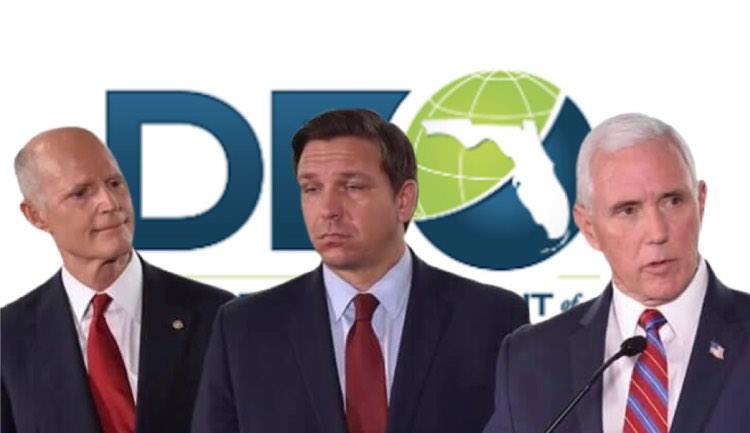 The latest skirmish between Florida senator and former governor Rick Scott and his successor Ron DeSantis has culminated in a skills contest that was won by DeSantis, due to Scott being disqualified.

The two men have a history of verbally sniping at one another in the press over issues ranging from the opening of the economy in the wake of COVID-19 to assigning blame for a severely flawed state unemployment system.

The latest bickering was centered around a disagreement over who could go the longest without blinking their eyes. Someone who overheard the exchange suggested a “No Blink Challenge” with the loser obligated to make a sizable monetary contribution to a worthy charity.

Scott and DeSantis agreed to the terms, settling on the eventual prize being a $10 donation to the Florida Department of Economic Opportunity, the agency that administrates the state’s unemployment benefits program.

“I will win this so-called ‘challenge’ easily. Not many people know this about me but I can sleep with my eyes open”, DeSantis said in the days leading up to the showdown. “Similar to the way I govern with my eyes closed.”

He ended up going 107 hours, nearly four and a half days without blinking before yielding, with his eyelids eventually scraping against his dry eyeballs and emitting a screeching noise like two pieces of rusty scrap metal being dragged across one another.

For his part, Scott never blinked once and still hasn’t, not even displaying the slightest sign of discomfort. “When is he going to learn he can’t beat me at anything?”, said Scott ungraciously.

However, Vice President Mike Pence, who had been tabbed to serve as a judge and mediator overturned Scott’s victory and ruled in favor of DeSantis due to the fact that Scott is a reptile. “Rick doesn’t blink because he doesn’t need to”, said Pence. “In fact, I think the only reason he has eyelids at all is for something to breathe through.”

“Typical Rick Scott move, having to cheat to win”, said DeSantis, pouring bottle after bottle of Zephyrhills water into his eyes. “Pathetic. Oh God, I just swallowed some up my nose by accident! Did anyone boil this first?!?”

“Whatever,” said Scott. “That little bitch knows who the winner is. If he wants to issue another challenge for something else, he knows where to find me”, as he unhinged his jaw and ingested a live raccoon.

Scott is fully expected to not pay off on the wager. Neither was DeSantis had he lost.