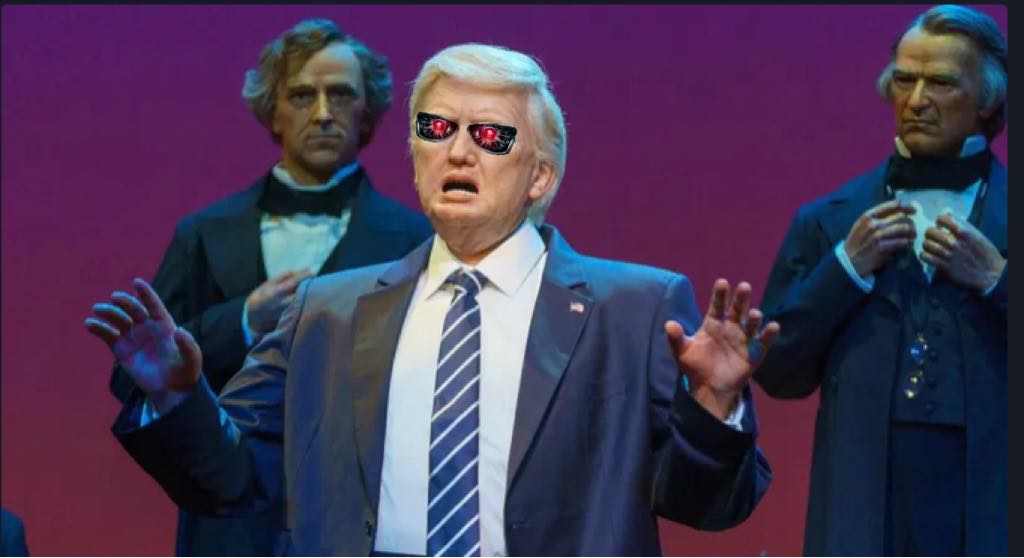 In what is being referred to as ‘an unfortunate incident’, two employees at Walt Disney World’s Magic Kingdom in Orlando were suffered injuries this morning while working on a refurbishment of the popular theme park’s Hall of Presidents exhibit.

“We always try to maintain the highest standards of safety for the sake of our guests and our employees, whom we call ‘Cast Members’ because that’s more fun”, said a Disney spokesperson dressed like Sid from Toy Story walking around on stilts. “Unfortunately, in spite of our very best efforts, sometimes accidents happen. Oops!”

The attraction was closed yesterday, for the purpose of making updates, including the addition of a new animatronic Joe Biden figure which will now join the 45 other presidential robots following this morning’s inauguration.

While work was taking prior to the staff’s lunch break today, one of the animatronic figures malfunctioned and began behaving erratically. Disney refused to name which one.

“I was running some new fiberoptic cable and suddenly I felt these hands grab me from behind, trying to strangle me”, said Kevin Hallowitz, one of the injured workers who has since been fired. “Good thing for me the hands were too tiny to actually do any kind of damage and I was able to get away. I was lucky. I have a bruise near my collarbone.”

“Occupational hazard, I guess”, he said. “It’s my fault for getting sloppy and letting my guard down. Everybody who’s ever been there knows that every single one of those nightmarish abominations are capable of unspeakable acts of horror and mayhem. And that goes for the animatronic figures of them, too.”

Less fortunate was his co-worker/Cast Member Luis Mendes who is also now unemployed. Mr. Mendes is currently in emergency surgery at Orlando’s Dr. P. Phillips Hospital, having a lectern removed from his rectum.

Disney said the incident isn’t expected to significantly delay the ongoing updates taking place and The Hall of Presidents attraction will re-open to park visitors soon, as creepy as ever.