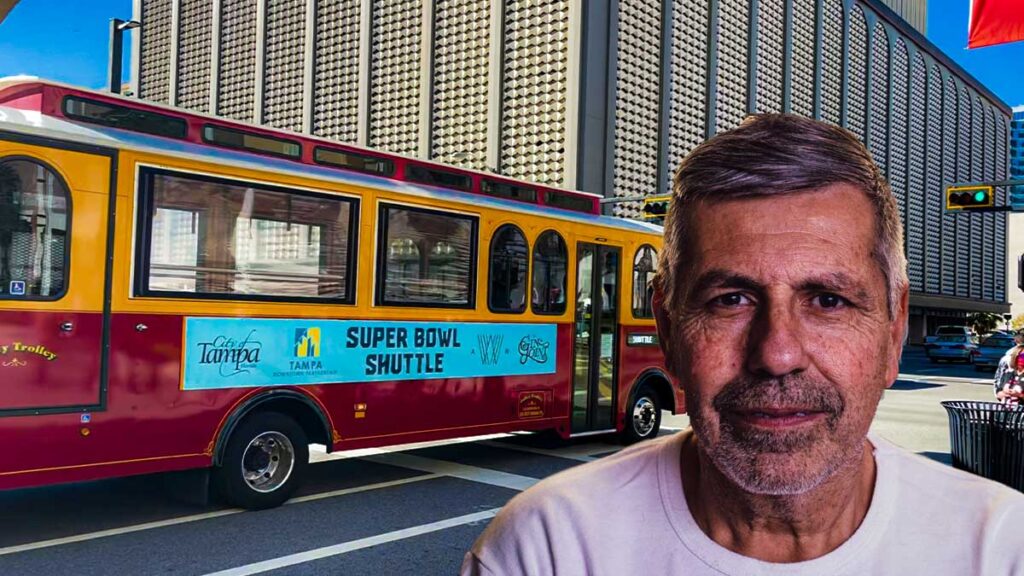 “The Tampa government has spent millions to ensure Super Bowl guests experience everything this city has to offer,” said Tampa Police Chief, Brian Dugan, during a brief press conference. “We have reports of a rogue agent kidnapping visitors in his Super Bowl themed RV to show off a condemned trailer he is trying to rent out.”

Dugan says that the perpetrator traps victims into an hour-long time share presentation.

“He really wants to rent out that trailer in Dade City,” said Chief Dugan between bites of his donut. “It’s a nice trailer, it’s just a little bit outside of the city, but if you work in Tampa and have to commute, there are far worse options.”

Police are telling folks to be cautious and to inspect the Super Bowl shuttle for Armature Works and CW’s Gin Joint logos before riding.

“Tampa is a big place, and the part we want to show to visitors is incredible small,” continued Chief Dugan, who was now on his third donut since beginning the press conference. “We get one shot every couple of years to show the world that Tampa is not all hookers and spice smokers.”

A couple police officers then brought out a keg to the stage.

“Now if you’ll excuse me, I have to do a keg stand for charity,” said Chief Dugan as the police officers hoisted him upside down by his legs so that he could start chugging beer directly from the keg while they counted.

“1…2…3…4…5…” counted the cops, but Chief Dugan spit out his beer everywhere and asked them to let him down.

“Okay that was like what 6 seconds? We’re donating $100 for every second I chugged beer.” Chief Dugan started cleaning himself up as they brought out a giant check for $600.  “Now to go drive this over to the casino and see if I can flip this into something substantial that will actually help children.”

When the press conference ended, I stepped outside to smoke a cigarette.  As I stood on the sidewalk in front of the Downtown Tampa Police Station, a Super Bowl shuttle pulled up.

I jumped in and sat in the crowded shuttle with many maskless out-of-town visitors. The shuttle drove past Armature Works without stopping.  We sat in the trolley for 45 minutes and arrived at a trailer park in Dade City.

The driver then forced everyone out of the shuttle at gun point and led us all into a double wide trailer.  He then gave us a tour of the property, complete with refreshments and snacks.

Personally, I wouldn’t move out there, but I can see the appeal of the area.  After the presentation, I ordered an UBER and ended up paying $50 to get back to Downtown Tampa.

The City of Tampa has assured all residents that these free shuttles are for visitors only, any local who tries to board an official Super Bowl shuttle for transportation services will be arrested.