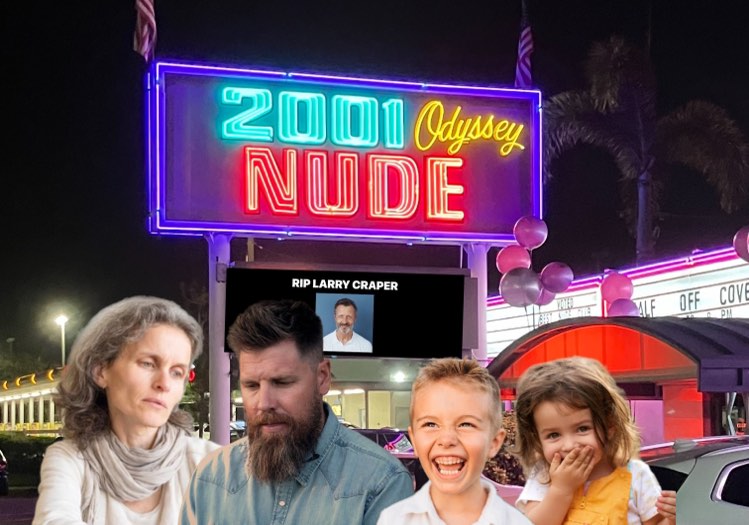 The family of Tampa’s Larry Craper, husband, father, and grandfather, learned of his recent passing after seeing a remembrance message displayed on the digital marquee outside the 2001 Odyssey gentlemen’s club on Dale Mabry.

“I just assumed he had left me. I didn’t know he was dead,” said his widow, Marlene Craper. “He’s done that before, just disappeared for a few days or months. But this is the first time he’s ever died.”

Marlene, her son Steve and grandkids Joey and Suzanne were on their way to Sonic, which happens to be right next door to the 2001, for SONIC Blasts® made with Mini M&M’S® – “The kids love ’em… and to be honest, I do too,” said Steve – when they saw the message on display.

Marlene and Steve didn’t know what the kids were talking about at first until Marlene caught a momentary glimpse of the marquee. They drove around the block to look again and learned there was indeed a message stating “RIP LARRY CRAPER” with his picture. This inspired Joey and Suzanne to yell, “Yay! Pop-pop!” some more.

“What a way to find out your dad is dead,” said Steve. “I drive up and down Dale Mabry all the time and had never seen it. Maybe they just put it up.”

“At any rate, I can’t have the kids getting excited every time we drive by just because they see his picture,” he said. “So I yelled at them, ‘HEY, SHUT UP! HE’S DEAD!’ Sure, I guess I could have handled that differently but it seems to be working so far. They haven’t been excited about anything since.”

An entertainer who works at the club who goes by the name of “Floss” confirmed the circumstances.

“Yeah, he died. Here! That seat right there!”, she said, causing a customer who happened to be sitting in that seat to get up and move.

“I remember it was a Tuesday! It was terrible. I was working when it happened. You know how many people feel like being super generous with the tips on a Tuesday afternoon while EMT’s are carting a stiff out of the showroom? None,” she said. “But he was a regular and a good tipper. We’ll miss him. We have lots of regulars who die in here all the time but I’ve never seen the club put a memorial on the marquee for any of them. That should tell you what kind of regard he was held in.”

“I guess it’s better than finding out from a sticker on the back window of a 2004 Chevy Silverado,” said Marlene, who was married to Larry for 38 years. “That was how I found out my mom died last year.”