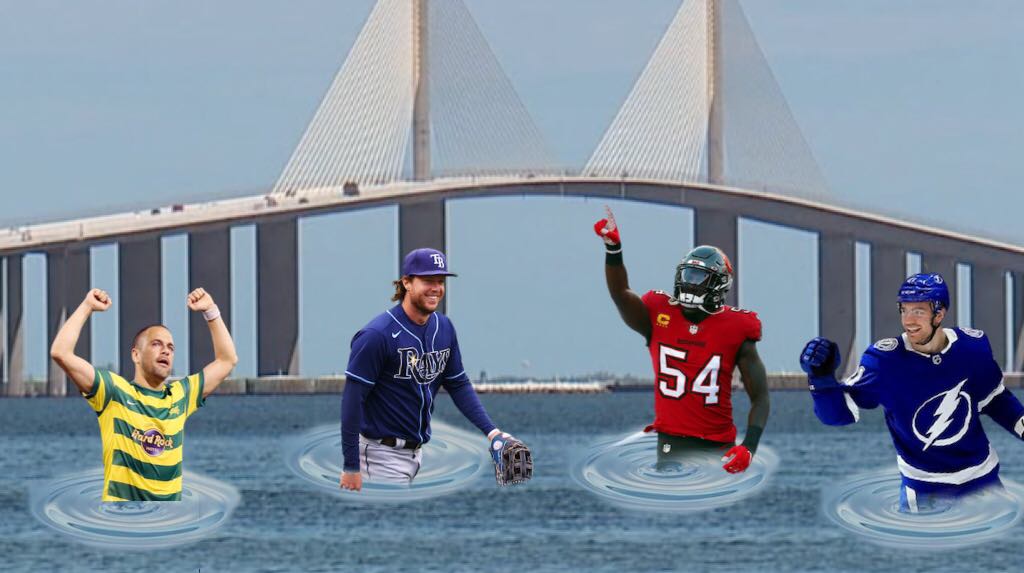 A pair of Tampa Bay sports fans have filed a $6 billion class-action lawsuit against the Buccaneers, Lightning, Rays, Rowdies, Major League Baseball, the National Football League, the National Hockey League and the USL Championship league, due to the fact that none of the teams listed actually play their home games in the body of water known as Tampa Bay.

“Tampa Bay is a large natural harbor and shallow estuary connected to the Gulf of Mexico on the west-central coast of Florida, comprising Hillsborough Bay, McKay Bay, Old Tampa Bay, Middle Tampa Bay, and Lower Tampa Bay…,” says the federal court complaint filed last month. “Amalie Arena and Raymond James Stadium are concrete buildings in the swamps of Tampa. Tropicana Field and Al Lang Stadium are similar facilities located in the swamps of St. Petersburg. Everything besides Tampa Bay itself is a swamp. They’re not exactly exciting and romantic destinations, where you can find dolphins and crabs and groupers frolicking joyfully. More like fetid cesspools filled with snakes and alligators and bugs. And the Bucs, Rays, Bolts and Rowdies have absolutely no connection whatsoever with the spectacular body of water we know as Tampa Bay.”

Plaintiffs Arnold Ugbirth and Maggie Whipkith insist they were duped by false advertising and other fraudulent deceptive practices into believing all of the region’s major professional sports teams play their games in the water and suffered significant emotional trauma and financial losses as a result.

“Why would baseball, football, hockey and other kind of football teams say they play in a large body of salt water when they don’t?” asked Ugbirth. “That just defies basic common sense.”

The class-action case also seeks to represent anyone who was tricked by the teams’ marketing since 1976 into attending any games on dry land.

“I’m pretty sure the Lightning might be exempt here, since I think they did play games at Pass-a-Grille Beach for a couple years between the fairgrounds and the old Thunderdome (now Tropicana Field) in the 90’s,” said world-famous bus bench lawyer John Morgan, as the eyeballs in his head turned into actual dollar signs, something that apparently happens frequently. “Tell Jeff Vinik to call me. I think I might be the only lawyer in the world that can possibly get him out of this jam.”

United States District Judge of the United States District Court for the Middle District of Florida Mary Stenson Scriven said even that step might not be necessary. “I can’t issue a ruling until I hear all of the evidence, of course. But I’m inclined to dismiss the suit on the grounds that it’s really stupid,” she said.

Ugbirth and Whipkith are not deterred by the judge’s skepticism.

“We have a $6 billion contingency lawsuit ready to go, based on the grounds that the Buccaneers are not a swarthy lot of freebooting scallywags preying on Spanish ships, the Lightning are not a natural electrical discharge of very short duration and high voltage between a cloud and the ground or within a cloud, the Rays are not idealized geometrical models of light, obtained by choosing a curve that is perpendicular to the wavefronts of the actual light, and that points in the direction of energy flow and the Rowdies are actually quite even-tempered and reasonable to deal with,” said Ugbirth. “Those are all just straight facts!”

“I’m representing them in this one,” said Morgan, farting a cash register sound.