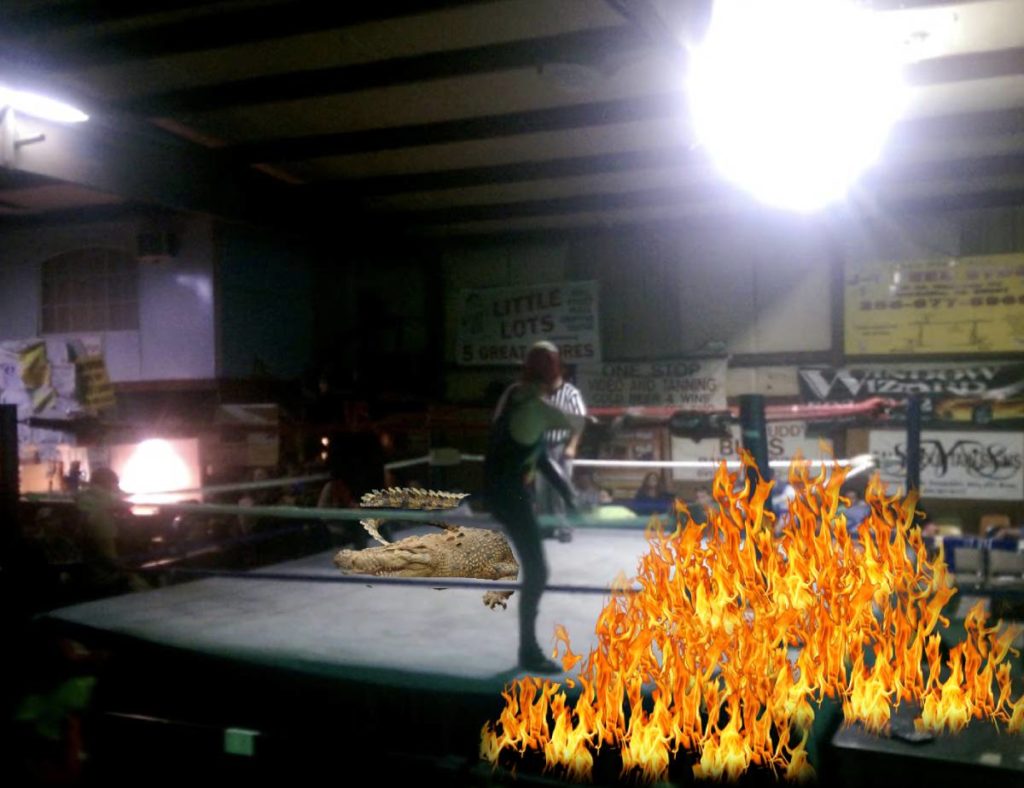 In a horrific turn of events, the scheduled bout between man and beast at the Land O’Lakes Colosseum ended in tragedy after a botched pyrotechnic spot resulted in the death of Ronny “The Gator Grappler” Davis.

The Colosseum Wrestling Extravaganza (CWE) main event featured Davis defending his championship belt against a gator they had recently found in the lake near his trailer park.

“It was the most unbelievable match I’d ever seen,” said Eduardo L. Heets, 36, a New Port Richey resident and self-described “Wrestling Enclyclopediac”.

“The things Ronny and that 8-foot long, 200-pound gator was doing in that ring was some of the finest mat work I’ve ever seen,” continued Heets as he took a moment to wipe away a tear by pretending to remove and wipe off the smudges on his sunglasses using his Salt Life T-Shirt. “This was my personal Mankind vs Undertaker in a Hell in the Cell match.”

One attendant told us multiple “This is awesome!” and “Fight Forever!” chants broke out during the grueling 35 minute long match.

“Davis was about to hit his signature flying torpedo headbutt on the gator who would then assume the position on the table,” says Davis’ in-ring manager, Wally “The Wallop Star” Lopez. “I was scheduled to betray him by launching fireworks in his face, causing a distraction so that the gator could hit his signature and win the belt.”

Lopez begins to sob uncontrollably, “I don’t know, it happened so fast, we’d done that spot so many times you start taking things for granted.”

The loud pop from the firework startled the still amateurish gator, whose tail caused the table leg to slip, causing Davis to miss the table spot resulting in his hair catching on fire instead of taking the firework blast safely to the chest.

“We knew we shouldn’t have oiled the ring with Crisco,” recalls Lopez.

Davis got back into the ring with his hair ignited and frantically rolled around, causing the fire to spread.

Spectators assumed it was all part of the show until officials came out wielding fire extinguishers and started screaming for everyone to get out.

Miraculously, no one else was hurt and the Land O’Lakes strip mall remained standing with minimal damage.

Organizers have already scheduled an event for next weekend to commemorate Davis, and will also hold an Alligator Battle Royale to crown the now vacant CWE champion.