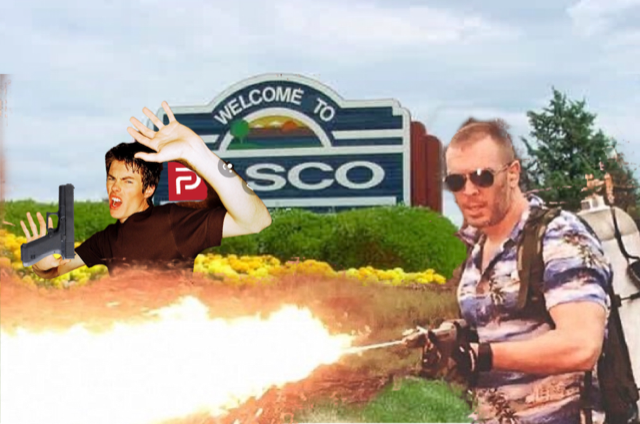 A man who recently purchased a flamethrower from Elon Musk is receiving a lot of attention on his social media.

“I saw the flamethrower for sale, and it wasn’t illegal to have it in my county,” said Pasco County resident Beephy Wellington.   “The flamethrower had a fire sword mode and I’ve just been going around stabbing stuff with it.”

Wellington pulled out his phone and started showing me all the clips he posted to his Parler account, the Twitter-like app specifically made for conservatives.

“Yeah this one’s got like 50 views, it’s pretty good, been getting a lot of feedback on this one,” said Wellington while telling me to check out what he was about to do with his flamethrower to a gun he found. “I was going to the bank to deposit some cash, I’m a small business owner and our COVID money finally came through. Saw this gun on the ground and I wanted to see if the sword mode would cut it in half.”

The flamethrower did indeed stab through the gun, but Pasco County Police are saying the gun may have been evidence that could have put away one of Florida’s most dangerous criminals.

“The cops were super pissed when I told them I had found it and wanted to see if I could stab it,” said Wellington who keeps his flamethrower with him at all times as a defense mechanism.

Chief Wellington says they have been looking for a man who shoots people and leaves the gun behind to taunt the police department.

“We’ve collected like eight or nine guns now, and we believe the one that was stabbed by the flamethrower sword was the one that was finally going to put away that illusive menace,” said Chief Wellington before excusing himself to the rest room.

I waited awkwardly in the police media room, but Chief Wellington never returned.  The flamethrower owning Wellington also invited me to hang out so that I could film him lighting stuff on fire, but I refused after he said he wouldn’t let me try it out.