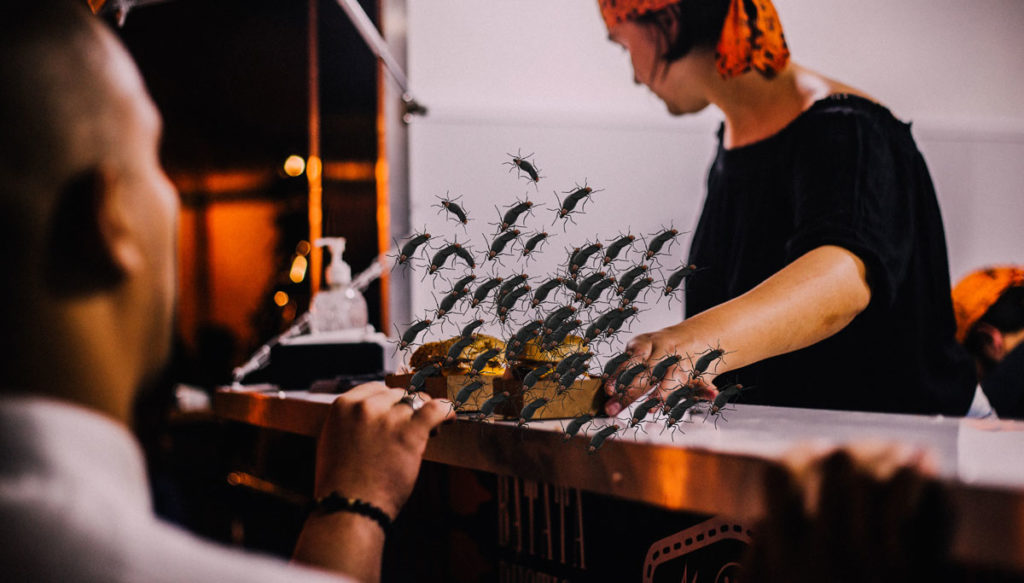 “Bugs Co.” Food truck corporation was officially confiscated by the police, late Sunday morning, when it was caught selling fried and live love bugs by the dozen on a stick from the front of their truck.

Now you might be thinking, “engine-bed? Is that the correct term for what he thinks he’s describing?” The truth is, I don’t know exactly what that’s called. The casing of the engine. The top part. In the middle. When you open the hood it’s usually middle/middle-left, very large, sometimes plastic, casing over the engine.

Oh, you know what? I just Googled it, and I didn’t read anything, but I looked at the images, and engine bed looks like something different completely. Also there’s pictures of actual beds, shaped like engines? If that makes any sense.

You know what. I just Googled some more images of under the hood of cars, and engines, and none of this looks like what I imagined in my head. I might have just seen something in a cartoon and that’s what I’m thinking of, it looks like maybe two cars have the kind of box-shaped flat surface thing I’m talking about on the inside to cook the love bugs.

Anyways, Bugs Co. food truck is now impounded in the south Valencia tow lot down in West Bradenton. The owners can’t believe they’ve been impounded, seeing as, “they weren’t even trying to start a food truck. Bugs just landed on the engine of their car as they had a system failure, one of the pumps broke in the transmission, causing liquids to spill onto the engine-bed causing a perfectly doused wet cooking surface, like something you’d find out of Benihana, except it’s love bugs frying under an open hood. It’s not our fault people paid us for them, and that we accepted, and continue to run a line-like service of orders and preparations and presentations.”