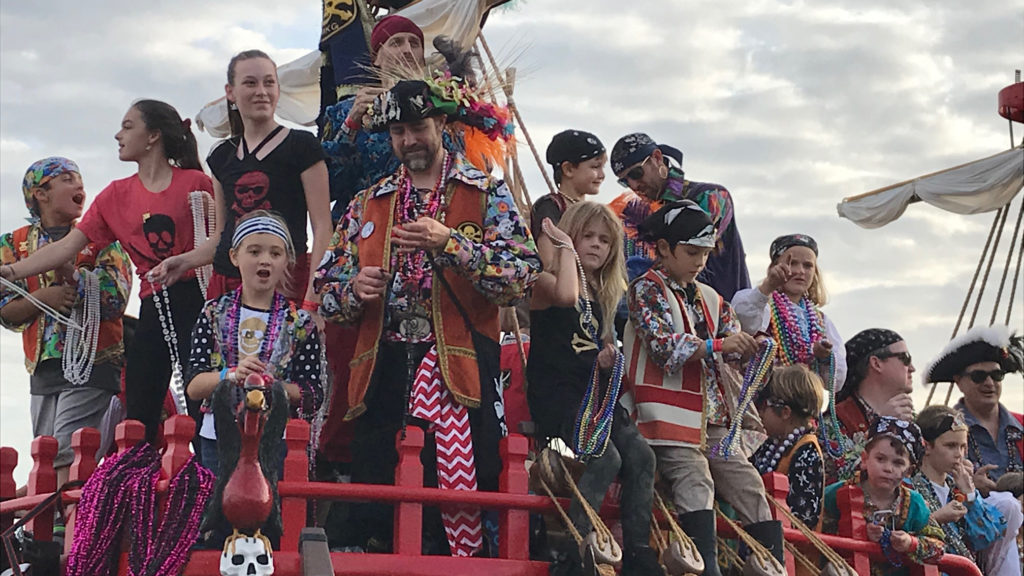 Following the success of another Gasparilla, city officials unanimously voted to expand the holiday by adding a second set of festivities in mid-March, called “Gasparilla 2.”

“We figured out this is what people want from us. We’re a one-night-stand party destination for hot mess problem children and elite old people.” Said head council chairman of tourism Meverly Sebastian, as she proof-read a stack of Gasparilla 2 concept stickers with a magnifying glass.

“We make 75% of our tourism money during Gasparilla weekend!” She excitedly rejoiced pounding her beach-weathered fist in the center of her cluttered office desk.

“Won’t that diminish the specialness of Gasparilla if we just exploit its’ allure for profit by adding more Gasparillas inevitably watering down the reputation Gasparilla has built for itself?” Chimed in a voice that came from the side of Sebastian’s desk, as an intern had been out of view hand sanding the side of her desk, working up a sweat which had stained through his oversized suit.

“I don’t think so.” Sebastian said.

“Ok.” The intern squeaked. “You know better than I do boss, that’s why you’re the boss, and I’m the one sanding your desk.” The intern slightly sarcastically remarked.

Sebastian tried to contain her disdain however her displeasure creeped onto her face.

“Excuse me, do you mind stepping outside for a brief moment?” Sebastian asked me with a smile.

“Of course, no problem!”

I stepped outside, and after Sebastian closed the door I could hear the muffled scoldings she unleashed upon her intern, which turned into loud thuds and smacks, as if she was tossing him around the room.

The door flung back open.

“You can come back in now if you’d like!” Sebastian said to me.

When I walked in I noticed that the intern was gone and her office window was wide open.

“You didn’t throw your intern out of the window did you?” I asked.

“What? Of course not, that would be crazy!” Sebastian laughed.

I walked to the window and peered out towards the sidewalk below to the see the intern mangled, sprawled out amongst the concrete.

Before I could turn and address Sebastian, I could feel my legs being lifted from under me, Sebastian had hoisted me up and pushed me out of the window.

As I fell and screamed in terror locking eyes with her once more as I fell to my impending doom, before I could feel my demise, I landed in a cart of pillows a local vendor was pushing along the promenade.

“Pillows! Pillows for sale!” The vendor shouted as he strolled down the lane.

“Oh my Gosh!” He remarked when he noticed me in the back of his pillow cart.

“I’m sorry, a woman in that office up there pushed me out of her window.” I said pointing up to the 15th floor where Sebastian’s office was.

“Holy cow! Thank God I happened to be selling pillows right here when you fell!” The vendor said.

“By the way,” I continued. “How would you feel if there was a second Gasparilla that took place in March?” I asked.

“Eh…” He paused for a moment. “I mean, I think people would still go to it, but it would definitely take some of the magic away from the first one.” He said.

“That’s exactly what the intern said!” I exclaimed.

“My brother is actually an intern in that office for the head council chairman of tourism, Mrs. Meverly Sebastian!” The vendor said.

Right as he said that, he noticed the body if his brother laying a few feet down the sidewalk.

“No!” He shouted. “I should have caught him! You should have been the one to hit the pavement!” He yelled in anguish with tears streaming down his face.

“How could you do this to me!” The man cried in pain.

“You’ve got to avenge him!” The man grabbed me by the lapel and began shaking me.

“You’ve got to make his death worth something! You need to show the world how great of a guy my brother was!”

“I’ll march back into that office right now and make this right!” I said.

The man was able to stop crying for a moment and wiped the tears from his eyes.

“You’re going to show the world how great my brother was, I know it!” He shouted.

I walked towards the building as if I was about to go in, but then at the last minute when the pillow vendor wasn’t looking I ran away, because I was scared of seeing Mrs. Sebastian again. I don’t want to risk my life again, despite the heinous acts she did. I just wasn’t feeling it that day. Maybe I’ll go back and make it right, but I haven’t made a plan yet. I’ll take it a day at a time and see how I feel.