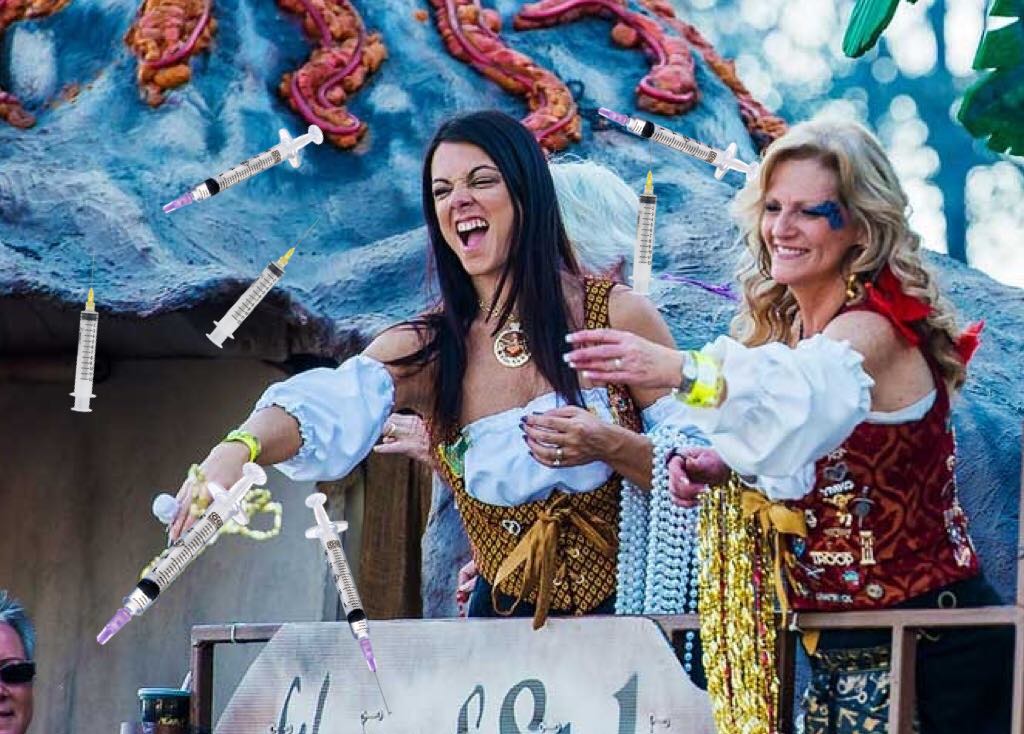 Gasparilla floats will be throwing Covid-19 vaccines instead of the traditional beads from their pirate ships this year during the Gasparilla pirate invasion of Bayshore.

“I’m fine with it.” Said Brenda Dendungo, a resident of Bayshore Boulevard.

“The beads kill my grass because they lay in them for weeks because I don’t bother to go outside and clean my lawn, that’s not my job, that’s someone else’s job.” She snidely remarked while bobbling her head with her arms crossed.

“What about vaccine needles? You’re not worried about those strewn across your lawn?” I questioned.

“I’m saying vaccine needles are probably more dangerous lying around than beads. Beads are blunt little orbs while vaccines are spikey, and could poke you unwantedly and cause you to bleed. Doesn’t that worry you at all?” I asked.

She shot me in the torso with a hand gun she drew right after I finished my question. She then started screaming “Fire!” And shrieking loudly. A few people ran over and she hysterically told them that I had sexually assaulted her.

I wasn’t able to get a word out before they held me down and threw a muzzle on me and tied my arms behind my back until the police came and took me away.

I tried to explain I didn’t do any of the things she suggested and that I was actually the victim, suffering a severe gun shot wound, currently bleeding out while being restrained, however the people who showed up corroborated her story claiming they were eyewitnesses and I had indeed committed the infractions she mentioned. So the police didn’t take one moment to question whether or not I were guilty and they threw me in the back of a police car and locked me up downtown for 2 days before the TNF lawyers came and bailed me out. I lost my spleen from the gunshot wound, and Ms. Dendungo is suing me for emotional damages, and so far the TNF lawyers have told me I, “don’t have a snowballs chance in hell.” So that’s not reassuring.

The doctor who examined me after the incident said the blood coming out of my bullet wound was “Covid” and that “maybe if I didn’t think Covid was such a joke maybe I wouldn’t have suffered the worst symptom,” Which I tried to tell him I wasn’t even doing, I merely asked a question about needles on a lawn, but he wasn’t having any of it.

Also the concept of a bullet wound being a symptom of Covid is originally a concept by the comedian Bobby Kady, but I felt in this context and my own little twist on it, I could borrow the premise. Also, I swear I go to that thought on my own and it wasn’t subconsciously thinking about Bobby’s bit! But it doesn’t matter what the truth is, if you have a joke similar to anyone else’s, you should give them credit for the premise anyway! Doesn’t matter, you’re never going to convince anyone you weren’t subconsciously influenced by them.

Anyways, Dendungo showed up to my house while I was recovering and physically attacked me so no matter what I do I can’t seem to catch a break with this story or this lady.

But the point is, floats will be throwing vaccines this year.