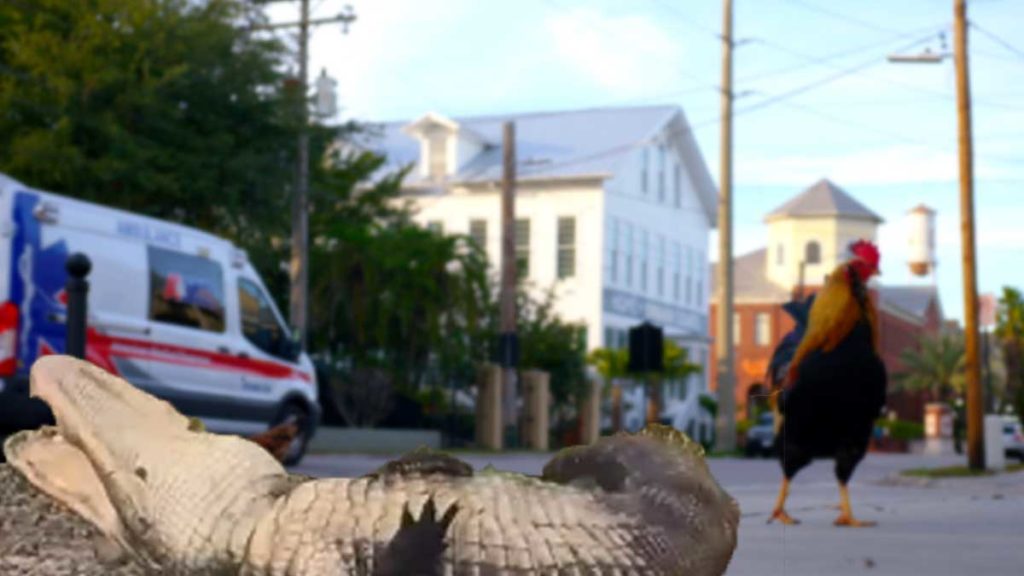 A wild alligator has been reported pregnant, after stumbling into the Benjamin Hernandez Chicken Park in Ybor City. Security footage caught an Ybor Chicken befriending the alligator, before mating with it only minutes after meeting it.

“We’ve never seen this kind of behavior before.” Said Alice Wedgie, morning-shift feeder and caretaker of the Ybor fowl.

The pregnancy is being hailed as “a miracle,” by religious animal groups, such as Devout Christian PETA and the Animal Coalition of Jesus.

“We knew one day animals would naturally start to cross-breed, and this pregnancy proves that it’s part of God’s plan for us all to eventually evolve into one species through natural insemination.” Said Melton Jeevus, head spokesperson for the One Species Foundation. “It’s our mission to inform all that humanity was meant to co-exist with animals, and through cross-breeding we can all develop into super humans, with animal powers such as flight and underwater-breathing.”

As Jeevus kept talking, a police officer placed him in cuffs because what he was saying sounded too close to advocating bestiality.

The gator has refused to leave the park after being impregnated, and has nested with the rooster that fertilized its egg. “Champ,” the name of the rooster who did the deed, has been given federal protection status, due to it’s unique circumstances, meaning that if you tamper with “Champ” and it’s gator mates’ pregnancy, you could land yourself in prison facing 25-life for interfering with a national exhibit.

“The chickens were already more protected than our people,” Wedgie said. “The homeless are inconvenienced by loud mariachi band music, while the chickens are fed numerous times a day by a government employee. We’ve demonstrated that we love our chickens more than our needy people.” Wedgie continued.

“But that’s a long philosophical topic we don’t really have time to delve into right now, I mean it’s very complicated to try and rationalize taking care of wild prehistoric birds, over our own brethren, however able bodied people have been given many opportunities throughout their lives to take advantage of programs that placed specifically for their benefit, however some don’t exercise their own abilities to better themselves, so at a certain point there’s only so much you can do for someone before you must shun and shame them and completely ignore them altogether.” Wedgie dips her hand into the feed bucket and beings scattering seed for the chickens. The gator leaves her nest to chomp on some feed.

“It’s not a perfect world we live in, but it’s the best we can do.” Wedgie says while looking back at me and continuing to scatter seeds about the cobblestone.

“Sure, if the unfortunate souls turn their lives around we should welcome them with open arms, however, if someone does not help themself, why is it our duty to care for them when they don’t care about themself? You could also argue that the Ybor chickens are more valuable for our local economy than the homeless who lounge in the same park, because the chickens have become a tourist attraction, a part of our culture, they stimulate our economy!” Wedgie’s eyes get big with hope.

“We don’t want to be known for enabling those who have chosen not to be functional members of society. But that’s just my humble opinion, and that doesn’t necessarily make it right.” Wedgie goes back to scattering seeds.

“If someone has a better philosophy, I’m all ears.” She bends down to pet a chicken. “I’m one with nature, and I’m a sister of man, and beast.”

Suddenly the pregnant gator chomps her hand off.

I’m able to tourniquet her wrist with my belt, and muffle the bleeding by wrapping my shirt around her mangled stub.

“My fingers! I’ve lost my fingers!” She screams.

Just then the gator turns back to try and bite off more of her limbs, but a homeless man jumps in front of it and smacks it on the head with an umbrella and it scurries away.

“Oh my lord, you saved my life!” Said Wedgie to the homeless man.

“Yes I did. Now I need $5 because my car run out of gas and I was on my way to Gainesville, and my family is still in the car, all I have is this empty gas can, and as you can see from my bracelet, I just got out of the hospital today, so all I need is a couple bucks so I can take the bus home.” Said the homeless man.

Wedgie gives the man three dollars. “I hope this helps.” She says.

“Actually, can I just have the rest of the seeds in that bucket?” The man points to the feed bucket.

“Sure.” She says, and the man begins eating feed out of the bucket by the handful, chomping and smiling.

“Ok.” They say, and wave goodbye back to me.

The gator is expected to give birth sometime around Christmas, hopefully in time to wear a silly seasonal hat and pose for a picture the city can use for its annual e-mail Christmas card to the community. The city has picked the name “Chomper” for the hybrid beast baby, however a list of names will be voted on by the people and the winner from the list will then be considered to have a run-off vote against the name “Chomper.”