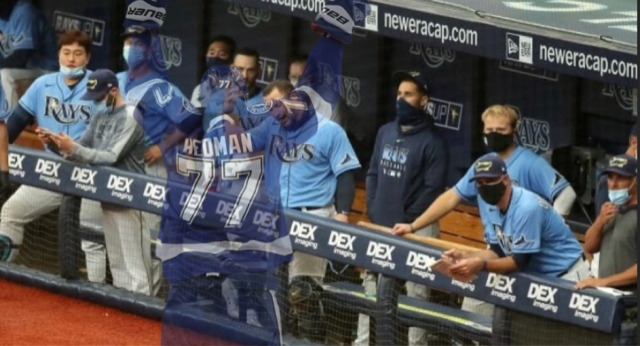 As the Tampa Bay Rays prepare to open their first-round playoff series against the Toronto Blue Jays tomorrow, they were visited by an unexpected and uninvited guest at their workout at Tropicana Field earlier today: the ghost of the 2019 Tampa Bay Lightning.

With the best record in the American League, the Rays enter the playoffs as the top seed.

“It was pretty scary,” says catcher Mike Zunino. “Hedman’s a big guy. He’s 6’6″ and he was wearing skates. So even though he was having difficulty walking around out there on the turf, he’s still pretty imposing. It was unsettling but we get it.”

Pitcher Nick Anderson says, “I’m not necessarily afraid of ghosts but he was talking in a spooky voice and he has that Swedish accent which kinda made him sound like a Dracula, so I have to admit it was pretty creepy. But what I am actually afraid of is getting swept in the first round like they were. Yikes!!”

The ghost concluded his remarks saying, “This is my eternal torment. Even though the present-day Lightning have gone on withoooooout me, I am doooooomed to live this existence in the netherworld of memes posted by Bluuuuuuue Jackets faaaaaaaaans for eternityyyyyyy.” He then added, “Don’t fuuuuuuck this uuuuuup!”