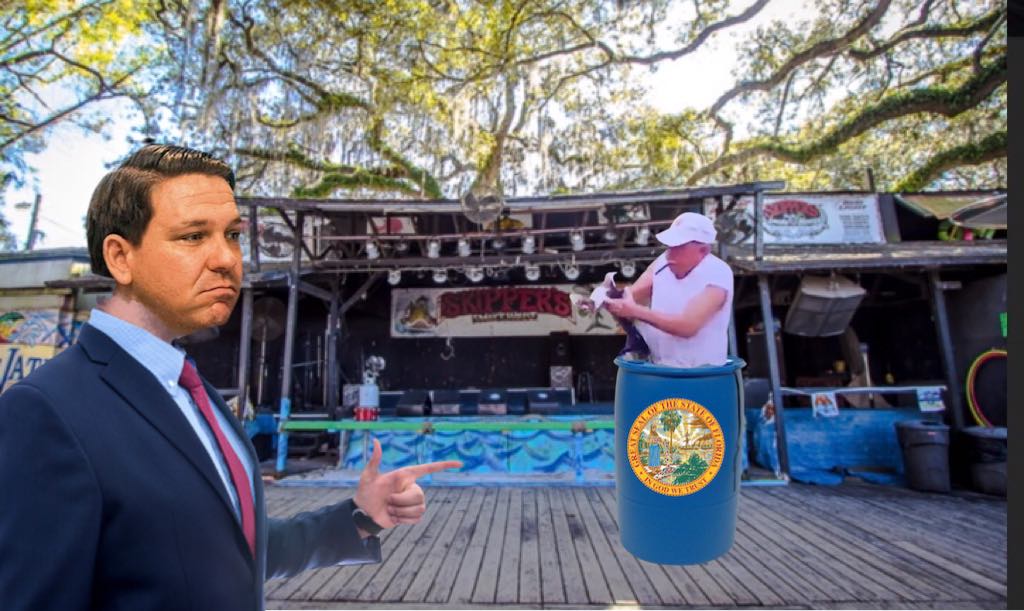 In an effort to bolster the state of Florida’s image, Governor Ron DeSantis is seeking to appoint Richard Wilbanks as the official ‘Florida Man’.

“I am sick and tired of all the stupid ‘Florida Man’ jokes’, said DeSantis at a press conference held at Skipper’s Smokehouse in Tampa yesterday afternoon. “People all over the country making fun of our citizens just for accidentally shooting someone or not being able to wear a face mask correctly or insisting on ignoring advice from scientists and healthcare professionals and endangering the lives of thousands of constituents. It’s hurtful and uncalled for.”

Wilbanks, a 74-year-old resident of Estero recently received global notoriety for jumping into a pond to rescue his dog from an alligator, which was captured on a video that went viral.

DeSantis said, “I caught his act and thought, ‘now THAT’S a Florida Man!’ Mature, heroic, loyal and a cigar aficionado. He’s a perfect example of what we want the world to believe we’re all about.”

DeSantis said the plan is to send Wilbanks on a statewide promotional tour, in which he’ll recreate his rescue by saving animals from a baby alligator. He gestured to Wilbanks who was standing waist-deep in a barrel full of water, smoking a stogie and choking a gator. “People will be encouraged to attend appearances with their pets and let Richard save them. We’ll charge $5 for selfies taken with Richard afterward. Imagine how excited folks will be to share the images on social media: ‘Look who saved Fifi! The Florida Man himself!'”, said DeSantis. “This will also allow us to start suing people for copyright infringement when they post a pics of some meth head in Holiday’s mugshot with the ‘Florida Man’ caption.”

DeSantis hopes the tour is so successful that it can be taken nationwide. “We’ll generate revenue and boost our image simultaneously. I’m a genius!”

Wilbanks, a volunteer with the Sharing The Landscape Project, said, “Oh, I’m not doing that. I’m retired and enjoying a life of leisure. I’m only here today as a favor to the governor. I wouldn’t have even agreed to doing this one-time thing if I thought any animals were in danger of getting hurt. I love dogs and I didn’t choke that alligator; I just held him gently so you guys could get some photos. I thought this was a Florida Wildlife Federation event.”