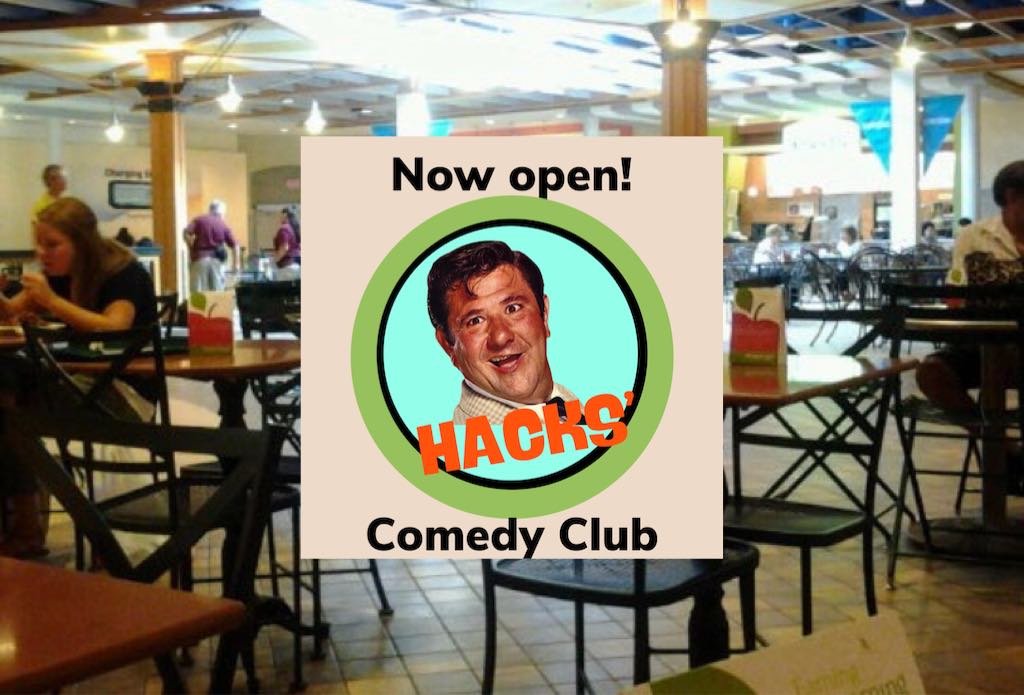 Hacks’ Comedy Club, famous for glorifying the iconic comedy stylings of Buddy Hacket, has opened a new location at the North East wall of the Westshore mall food court.

“He invented comedy! So we figure, why not go with what works? You should only be allowed to do jokes that this guy created! That’s where the phrase ‘hack’ comes from in comedy, people would hear a joke then go, ‘oh that’s Hack’ referring to Buddy Hacket being the original author of the joke! That’s why the comedians we hire are only allowed to use his jokes, jokes we already know!” Freeman enthusiastically explained.

“We’re between the Mrs. Noodles and the Burger King which is a good location because those are both very popular, and we expect a decent crowd all day every day.” Freeman went on.

“All the chairs that sit in front of our spot are our crowd, you’re not supposed to stop and listen if you didn’t pay for a ticket, our bouncer will push people out of our area who haven’t paid.” Said Freeman in a “that’s just the way it is” attitude.

The venue will charge people at the register the same as any mall food establishment, however instead of just offering domestic drafts and chicken fingerlings, it will also offer guests the option to buy tickets to the next show.

“We pay a guy who does middle-of-the-road one-liners and simple set ups which couldn’t possibly offend anyone, but he does it in a Brooklyn accent so it sounds dirty anyway. We trick you.” Said Freeman tapping his temple.

“We don’t want any original thoughts here, nothing disruptive at all.” Said Freeman.

“We don’t want anything that could mess up the selling of our domestic drafts and chicken fingerlings. Just basic ‘my wife’ stuff, ‘what’s the deal with’ stuff, ‘have you ever noticed how weird’ stuff. Really simple easy unoriginal material that’s just entertaining enough not for people to realize how expensive the drafts and fingerlings are.” Freeman said, honestly explaining how the comedy club dynamic worked.

“And we’ve got no problem booking it.” Freeman continued, even though I literally hadn’t asked him any question, I just showed up and he immediately knew I was the fake journalist and began oversharing and explaining things to me, like he got off on it.

“We’ve got guys who did one late night show 35 years ago and they’ve been touring ever since doing 7 shows a week for the last 2,000 weeks. Nobody actually cares what you’ve done, they just like seeing the little network logo by your name! It doesn’t matter! I mean unless you’re the draw, then it does, if you can’t fill the seats your out, but luckily, with our food court model, you don’t need to fill seats, because the seats will be filled regardless due to our proximity to Mrs. Noodles. So you can be some anonymous hack that roams the country, as long as you can just distract them long enough to upsell that double-load of fingerlings, we could give a sh*t!” Freeman put his arms out like “Can you believe it! That’s how it works!”

I said, “Mr. Freeman you’re not going to believe this, but I’m actually a comic, can I play your new club, Hacks?”

I sent him a 10-minute tape, and he hasn’t gotten back to me yet, but he has blocked me on all social media.

Note: This article is not a reference to any current comedy clubs in Tampa, I love every club in Tampa and Florida, and if you’re reading this right now, you should think about buying a ticket to your nearest comedy club and seeing a show because stand up is great right now, and you should support performers and venues who give them a platform alike. Comedy is awesome, comedy clubs are awesome, no matter what their style is, any place that gives a space to comedians in any sense is amazing.  If you’re a comedy booker or comedy club owner reading this, why don’t we talk more? Feel free to reach out whenever you want and I will come play your club, I mean unless it’s a really rough deal then I’ll have to think about it then still probably do it.

Sure there’s some clubs I wish I didn’t have to do. Some long drives, some low pays. There’s a lot of that. Drive 4 hours you’re getting $65 and maybe a couple drinks and part of a meal, we’ll have to ask when you get here.

It would be nice not to have to do those, but I’m just not in that position yet. If I could do a college every day that would be the best life ever. But that’s not the case. So til then I’ll still do 98% of gigs!