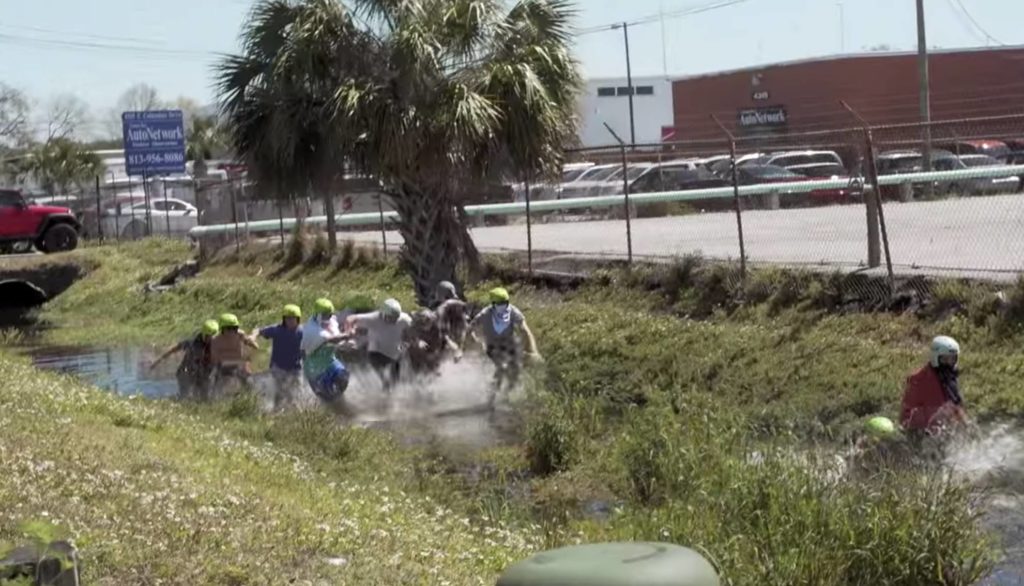 With less than two months until the world-renowned Tampa Pro brings the globe’s best skateboarding talent and highest Pabst Blue Ribbon consumption rates in America, concerns are beginning to surface over the safety of the most significant contest of the weekend – Moat Race.

Every year, Moat Race takes place in the slow flowing waters of the Spot River, located in front of Florida’s, if not America’s, most iconic skate park. The full-contact race is a roughly seventy yard trudge through the shallows, and crowd participation is encouraged by way of beer showers and throwing somewhat safe projectiles at competitors.

This year, however, a lack of government regulation has many would-be Moat-runners questioning whether or not the 2019 version of this run will hold up to the traditional level of safety, and whether or not a little extra itch is worth the glory.

“I don’t know, bro. I know it’s tradition, but without proper testing and sanitation work, I’m not sure I can risk my body like that”, claimed track-mark-laden Troy McAllister, a nine-year veteran of Moat Race, whom is also 25 years old, not a skater, and inexplicably hangs out with 16 year olds.

A lack of federal regulation means that any slack would have to be picked up by local government – optionally – which is proving to be a persuasion borderline impossible.

“I just built you little skate dickheads an entire park, replicated that piece of shit Bro Bowl you wanted to lynch me for destroying, and now you want we to send a pool boy to test the sewer water you retards swim in? Go fuck yourselves”, was (allegedly) Bob Buckhorn’s response to a request for city government assistance.

But the issues don’t stop there. Florida’s gulf coast is still reeling from the vicious algae blooms of late 2018, and the Spot River has been notorious for catching the worst algae-inducing agents in urban Tampa. With average temperatures in the city rising, toxic algae hybrids that science struggles to explain have exploded in the serene waters outside of the skate park.

“Generally speaking, in environments similar to the Spot River, the biggest cause of these blooms is nitrogen and phosphorus released by fertilizer”, explains former loser skateboarder turned USF-educated scientist Kyle McGill, “But the Spot River is a complete scientific marvel. There are algal blooms compounded with hepatitis from improperly disposed needles, absurd amounts of Four Loko from underage vomit, and a host of other vile content. It literally makes no sense.”

With no end in sight to the end of the federal shutdown, some suggested that the race be moved to the Rio Grande along the U.S-Mexico border and that the “fruit-booters” (slang for rollerbladers) be forced to pay for the event’s relocation. Little progress has been made on that front.

And while many will compete regardless of the conditions, there is still hope for a safe Moat Race. One report suggested that Jeff Lluis & the Chlorine Cowboys may volunteer their services to ensure a safe Moat Race for all. The report stated that Lluis’ initial response was that of rejection, until promoters offered him the opportunity to perform a “tight five” at the bottom of the halfpipe Saturday afternoon. Confirmation is yet to be received.

View all posts by Ashley Dieudonne →