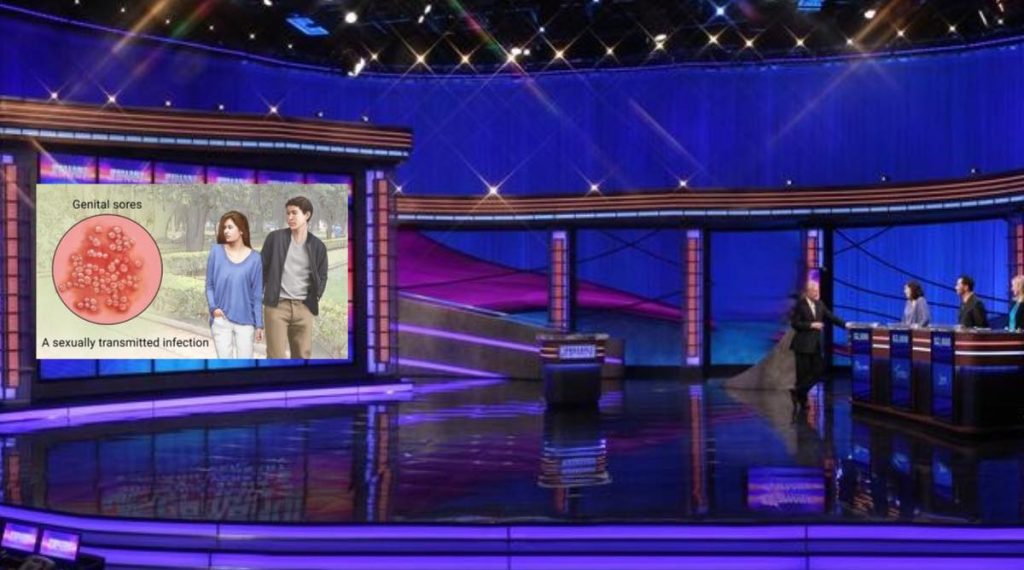 A new gameshow titled, “Herpes or Pimple” Which features contestants exposing their genitalia and then having to decide whether their opponents have herpes or simply just a pimple will be airing on ABC Family at 11:30 pm on Sundays and Mondays starting this Fall.

Tampa News Force was given an advanced copy of the first episode for review purposes and I’m happy to share that, it’s a hit.

Contestants face each other in pairs of two, then once a timer begins they drop their pants and must judge each others genitals. The first person to buzz in and make a guess has the first opportunity to win the round. But if they guess wrong, their opponent takes the round. The other contestants have earmuffs on when it’s not their round, so they don’t know the answer to the previous match ups.

The last two contestants have to judge each other while hanging upside down, this is the twist that the show adds to increase the drama.

I believe this will be a smash hit and families will be watching all around the world.

I’m now being told that the video I was sent to review was a hoax and this is not actually a television show that will be airing on ABC Family. I guess that makes sense, seeing as there would be no way to really make this family friendly. Gosh, I’m dumb for falling for this. I still think it’s a good show though, I was entertained.

And if this is not a real show, who went through the trouble of making this pilot and sending it to me?

It had a full studio audience and was filmed in what appeared to be a very large venue.

What the hell did I watch?

I’m now left with more questions and no answers.

I will get back to you all as I learn more information.

← Which party consumes more Adrenochrome? Democrat or Republican: A full breakdownWeather feels too good to be true: Citizens suspicious →