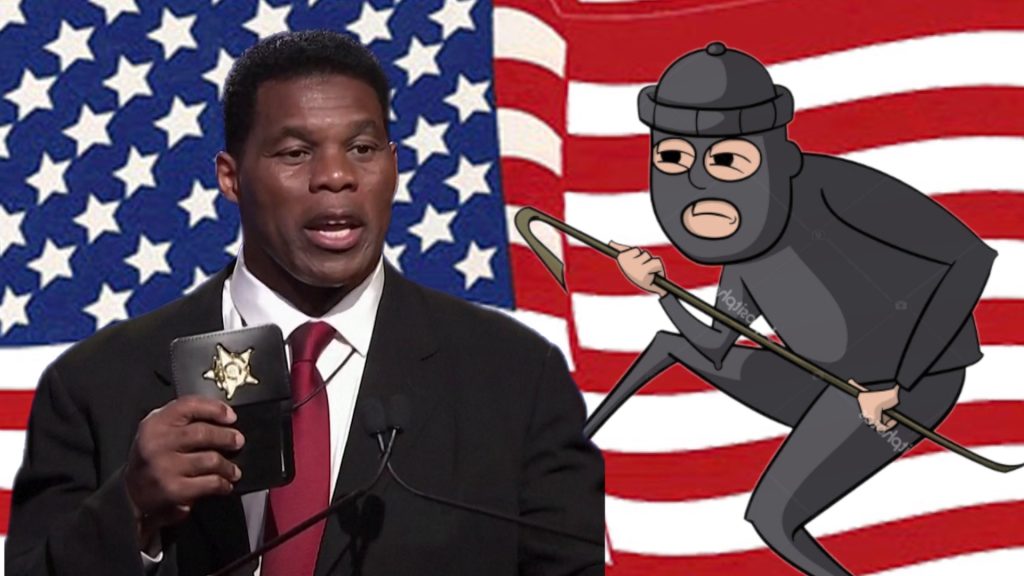 Having lost yesterday’s Georgia US Senate runoff election against Raphael Warnock, Herschel Walker says there’s nothing to keep him from immediately returning to his ongoing effort to rid the streets of crime in MakeBelieve Land, where he is the sheriff, mayor and former Super Bowl MVP.

“Well, I suppose I gotta go back to keeping freedom free and not-freedom expensive,” he said. “We must always be ever vanillagent.”

He showed how quickly he was returning to the crime beat by driving directly to Westlake, Texas, where he lives in real life, and knocking on someone’s door.

“Excuse me, ma’am; do you have any crime?” he asked her. She replied, “W-what…?” and he said “You’re welcome,” and walked briskly back to his car after getting her pregnant.

“Somebody is always trying to steal the invisible sheep around here, whether it’s rustlers or robbers or werewolves or some other sheep-stealers,” he said. “Good thing I’m on the job!”

“You can’t make a omelet if you believe in God,” he added for some reason.

Walker says he’s disappointed in the results of the obviously-unfairly rigged election (“If it was a fairly-rigged election, I would have won the dag-nabbed thing”, he said), but doesn’t mind continuing to do important pretend work.

“I just know that this is what Mr. Trump and Miss Graham would want me to do,” he said.

“Yes, exactly,” said Senator Lindsey Graham, who was seen frequently at Walker’s side during the campaign leading up to the election. “You stay right there and do all of that and we’ll call you when we need you.”