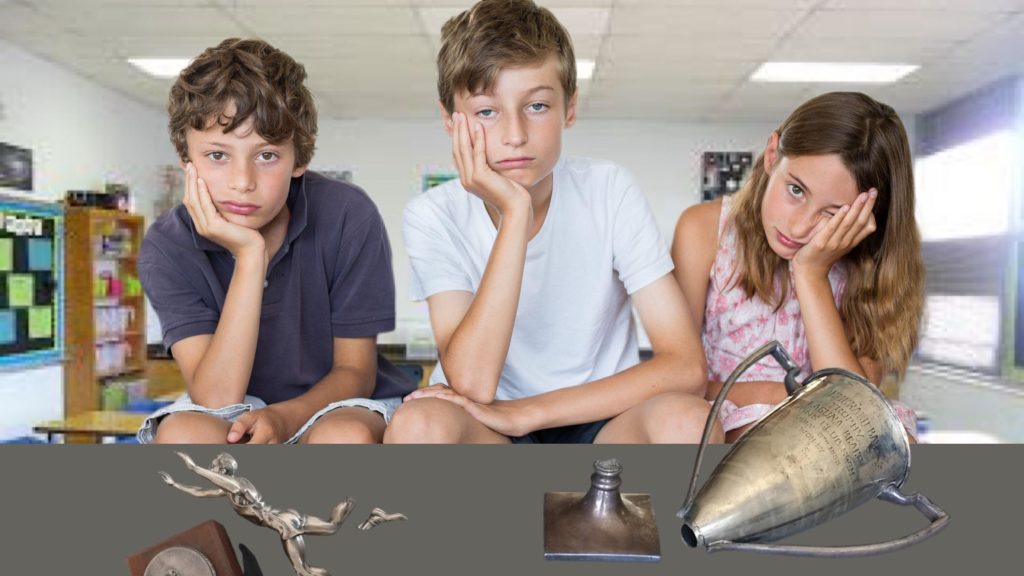 Hillsborough county legislators decided, unanimously, to overturn a piece of legislation that has been under heavy fire in recent years.

The nationwide law required public schools, extracurricular activities, and certain afterschool programs to provide “participation trophies” to children whenever awards were to be given out in most cases, particularly sports events and any competition “involving drama students”. Hillsborough officials ruled that the law is “unconstitutional and ratified under unlawful circumstances”.

For our dumb, stupid readers unaware of how this law came about: The concept of “participation trophies” was an idea proposed by a tight-knit group of activist children ages 7-9 who believed children should be awarded “more inclusively”. They lobbied for state governments across the country to adopt this new concept, were denied, and resolved to hold all the grown-ups at gunpoint until they agreed to ratify new, radical trophy legislation.

This widely known fact confirms that every time a younger Millennial, Gen Z, Gen Alpha, Gen Omega Proteus lV, or Ginger received a participation award from a 46-year-old coach, it was because that no-nonsense tough guy was forced to by a shadowy cabal of violent children pushing radical legislation.

This law likely came to fruition in whatever year Kid Rock was birthed from the ashes of serfdom.

The county’s removal of this law has garnered various responses from the public. We spoke to James Shest of Temple Terrace, a 46-year-old father of 6, while he stood on his exceptionally well-kept lawn.

“They’re trying to make our kids soft. This whole inclusivity thing is nonsense. Awards are meant for winners and people who accomplish something and these kids ain’t accomplished nothing but dying their hairs pink and being offended,” Shest explained, smelling of shaved grass and Bud Light, eyes a piercing, beautiful sea of bright blue. “That’s why I pulled my youngest out of school to homeschool him. Now he has plenty of time to practice being a Fortnite World champion.” Tears welled up in Shest’s eyes. “Cause my boy is a WINNER goddammit!”

Searching further for the truth*, we next spoke to Heather Baskets, a single mother of two living in Greater Carrollwood, whose lawn had way too many plants for our taste. It was like a tiny maze navigating the steppingstones and potted plants just to get to her front door. “We know you’re in there Heather!” I yelled after knocking several times.

“You know, I didn’t much care for this participation trophy crap either, but as a stereotypical, annoying liberal woman, inclusivity sensitive equity socialism ableism patriarchy Bernie offended!” Baskets declared, very obviously seeing a new man. “Can I please see my children now?” I asked the unbelievably alluring woman. “Hell no you p***y, try paying some child support then maybe we’ll talk,” Baskets said, with all the dismissiveness of a woman who ruined my life.

Finally, we sat down with Harper Exemplum, a 10-year-old girl who’s part of the Karly Marks Swim Team of Hernando County.

“Last year, I didn’t place in the finals for the swim competition, so they gave me a participation trophy,” little Harper said, gloomily. Ever since she received her trophy, her body deflated into a lazy, incompetent goo pile. Now all she knows is entitlement and video games. “All I’ve been able to do is play Elden Ring and Fortnite.”

Since the incident, Harper has become the Fortnite World Champion.

It’s clear that the effects of those radical children who pushed this legislation many years ago are still being felt by many to this day. Following Hillsborough’s faithful decision to overturn the participation trophy law, many counties in Florida are considering doing the same. These other counties can only hope to escape the tight grip of all the children who grew up receiving participation trophies, whose entitlement and insatiable thirst for inclusiveness is no one’s fault but their own—adults definitely had nothing to do with this whatsoever.

Anyways, I can’t wait to be able to see my children again so I can give them these iPads with Twitter pre-installed! I already made them accounts and followed Elon Musk on them, so they won’t miss a word of his brilliant ideas and wit!

Thank you Robert James Ritchie for liberating us!!

* ”Truth” is based upon whatever information our Swamp Overlord, The Great and Almighty Gugėnlethiim deems as confirmation of our preconceived notions

Tampa Bay comic, travel journalist, and winner of hundreds of awards which he is legally unable to disclose. Still enjoys playing with Legos

View all posts by Jake Brown →