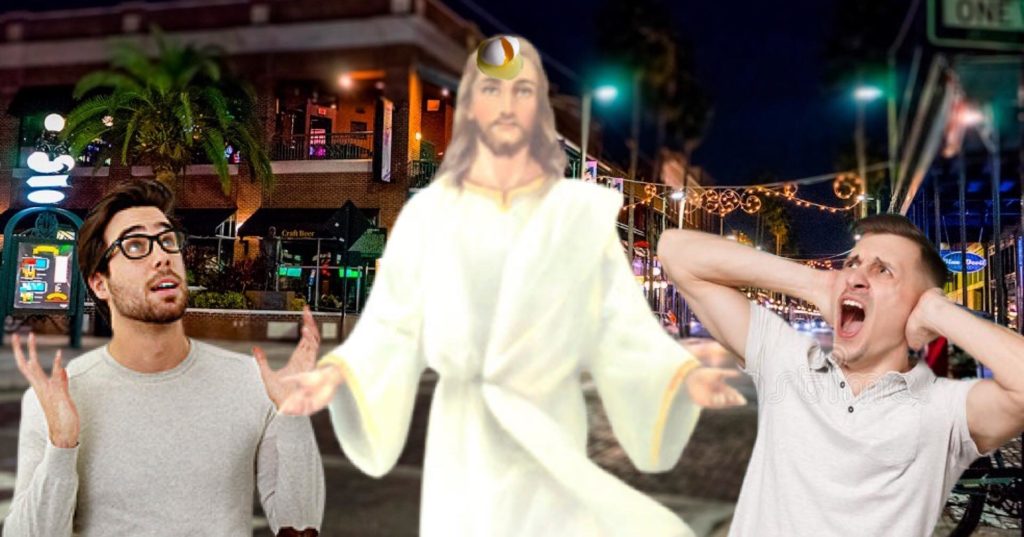 Eye witnesses confirmed that a homeless man on 7th avenue in Ybor was in fact the son of God, Jesus Christ, the messiah.

“This is exactly what I was afraid of.” Said Ed Edeneddy.

“We were walking back from one of those loud bars where drinks are expensive and it cost a lot to sit down, and we grabbed a dozen eggs from one of the bodegas, because we like sucking eggs on our walks home from the city, when we saw some bum on the street, and of course, like an idiot, I cracked an egg on his head and turned to my friends and went, ‘look it’s dumby-side-up!’ And we all laughed, and then of course my luck, he begins floating and glowing.” Edeneddy emphatically explained to me over coffee in a 7-11 parking lot early in the morning because it was the only time Edeneddy could get away from his sleeping girlfriend.

“My girlfriend runs my life, which might play into the reason why I’m such a total jag off, but yea, there was like a hundred people around which again, just reveals my stupidity that I attempted such a dumb little stunt in front of so many people for a very little reward, if you would even call it that.” Edeneddy pontificated with his hands.

After the being began floating and glowing it explained that it was the immortal christian icon, Jesus Christ, and that Edeneddy had “blown it for humanity,” and that he would “be back in 1000 years.” Before flashing brightly then zapping up towards the heavens.

“We had so many questions and would have loved to have any time with God’s kid. And now we don’t. And we have no answers or anything. Odds are we probably could have been gifted the knowledge of new technology or internal spiritual peace. And now we don’t have that, so…” Breadly tapped his police cap with his night stick in anguish.

How Jesus possibly could have interacted with humanity is continuing to be speculated, however local officials are telling citizens to be very cautiously wary of the homeless at the moment, and to, “be nicer than you normally would. You know, just incase it’s Jesus.”