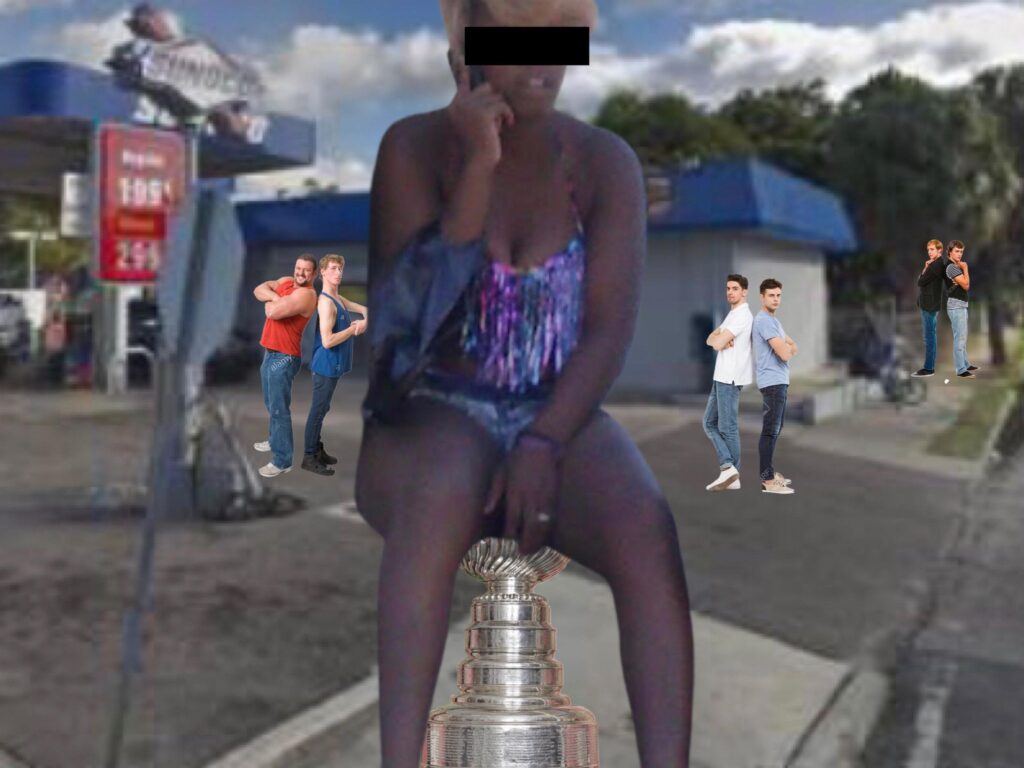 A hooker on Nebraska named Tracy is selling “Stanley Cup jobs” to all patrons looking for sexual pleasures in the Tampa Heights district.

The act entails her lining two men up “Back-to-back” then giving them hand-relief at the same time.

“It’s easy for me and I want double the money.” Tracy said in a raspy voice as she exhaled smoke from her Kool Menthol cigarette with the crush ball feature enacted.

“They stand with their backs to each other and get to fulfill some weird sexual experience with each other that isn’t quite gay technically but it still seems very homosexual and unnecessary. Like a weird bonding feature, it’s like when guys play golf.” Tracy effectively explained.

“I like getting a Stanley Cup job.” Chimed in Melvin Portnoy, her current paying customer who was standing a few feet behind her, slightly trembling in fear of something I don’t know.

“I’m not gay or nothing, but it’s the only way I’m able to form a bond with my buyer, see I sell printer paper, specifically for Toshiba printers, and it’s a hard sell, so I need to accelerate my personal and professional relationship with the buyer very quickly, so what better than with a Stanley Cup job from Tracy.” Beautifully delivered Portnoy.

I’m in the story now.

You thought I wasn’t going to show up?

Why? Just because it had already been a few paragraphs you thought you were safe from first-person injection into the story?

Anyways, sorry it took me a while to write the SCJ story, I know the Lightning won the championship a few weeks ago, but honestly work just piled up. I know it’s late, way passed my deadline, I’ve been getting an earful nightly because of it, trust me, you don’t have to tell me. But I finally got to the bottom of the pile, and there staring right into my eyes with the notice that read “Write the Stanley Cup job story or they will kidnap your family at midnight TONIGHT!” And I thought, “Oh, yea, that’s why my family got kidnapped.”

So I’m here now, writing the story, sorry it took a little bit, I hope you enjoyed it, and I guess I’m excited to get the wife and kids back? I was kind of enjoying the quiet, I thought, “I haven’t masturbated this loudly in months?” Then I remembered my family was gone and I didn’t question why they had been gone for 3 weeks. They leave a lot anyway, (per my demand) so I didn’t think to much of their absence. Anyways, long story short, (or long depending your level of enjoyment) there’s a person named Tracy on Nebraska avenue, and she’s giving out Stanley Cup jobs. So go get ‘em while they’re hot! Yeehaw!