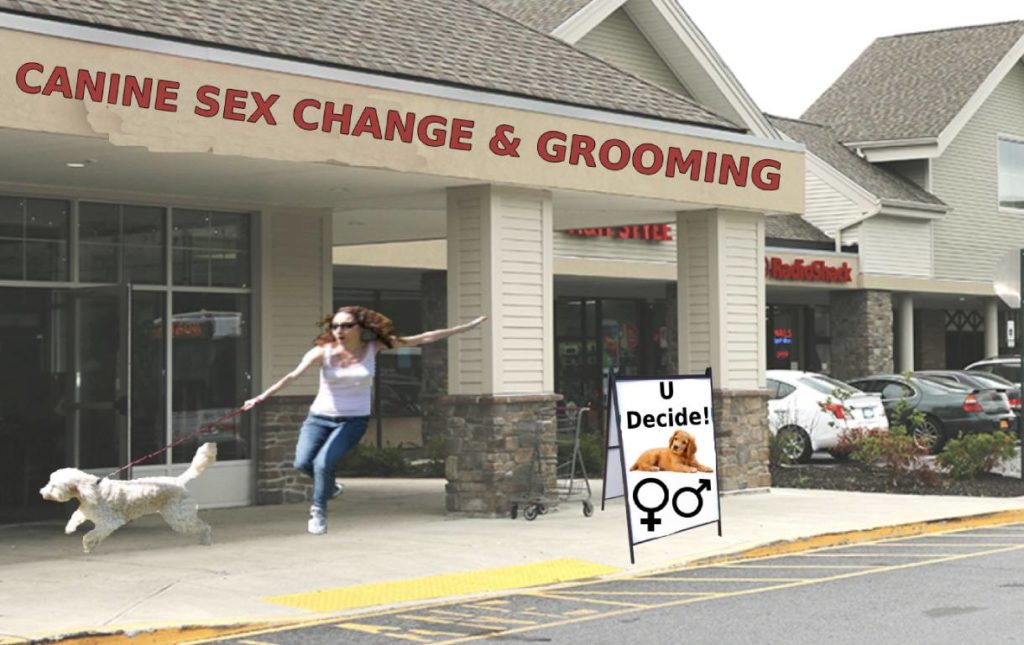 In a perversely progressive move, local groomer “Puppy Cuts” will now offer sex changes for dogs. Per owner request, a dog will now have the ability to become a bitch or a boy. The surgery will be done all in-store, and should take less than 15 minutes, as long as the animal-surgeon isn’t on lunch-break.

“It’s 2019,” says Delilah Morris, owner of Puppy Cuts, a business she inherited from her grandmother when she was 19. “Animals shouldn’t be gender assigned,” she takes a step towards me. “Sorry, I didn’t mean to get too aggressive,” she laughs. “A lot of people are mad at me, and I don’t think it’s fair.” Morris shudders and pulls her shirt up over her mouth as she shyly tries to hide her face. “I think if you want a girl dog you can have one, and if you want a boy one you should have one. I know you could just buy a boy dog or girl dog, but what if you already have a boy, but you love it, and want it to be a girl? Would God get mad at that?” She sits down on an antique ottoman which looks very shabby and could break at any moment. “You need to get out of here. I’m sorry, I’m having anxiety.”

As we leave, a protest began to form in front of Puppy Cuts raging against the new sex-change policy.

City Hall was contacted for comment on how this controversial policy could exist without the police immediately shutting down the operation citing animal cruelty, however the local governments released an official response saying, “We’re not touchin’ this one.”

“Morris’ grandmother did a lot for this community, and while we do not support what she’s doing at her business, we owe her grandmother a large debt which we shall never be able to repay, so the least we can do, is let her granddaughter get away with some questionable semi-bestiality acts. Beyond that we have no comment.” The official government response concluded.

So far only 3 customers have gone through with the controversial procedure and as a review of the results, the consensus was, “You can’t really tell.”