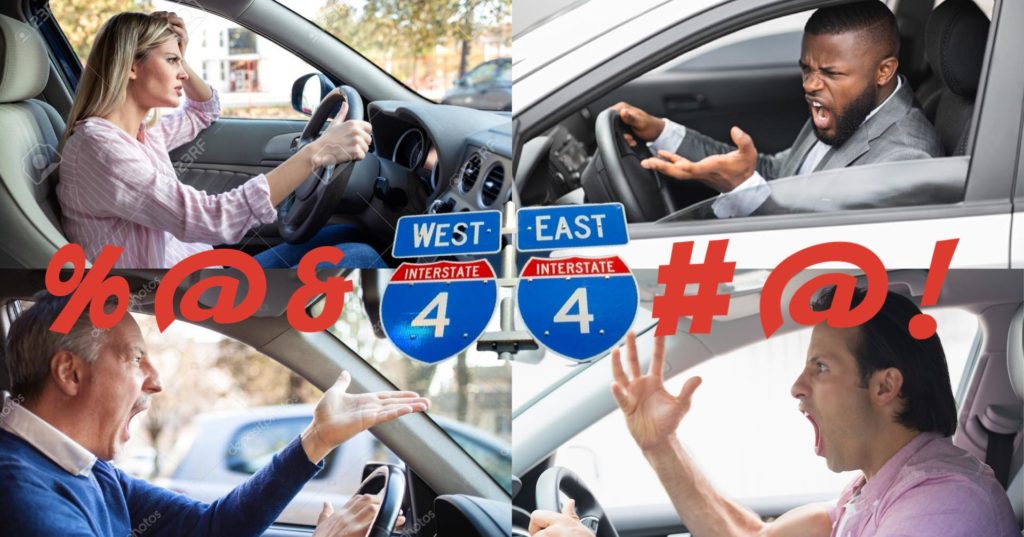 I-4, the heavily travelled interstate highway that spans just over 132 miles connecting Tampa, Orlando and Daytona Beach, has been declared by the State of Florida to be an obscenity, a class four expression of profanity.

Recognizing that the highway, which has always been heavily congested in certain areas on certain days of the week, is now a completely snarled traffic nightmare from one end to the other without more than a few feet at a time being a source of considerable frustration and anger all the time, the Florida Department of Transportation finally decided to stop pretending that’s not the case.

“This is not censorship,” said state language commissioner Staci Dingledonger. “If anything, we’re actually adding to the lexicon of available swear words, not taking away from it.”

“That said, we do feel that this re-classification will actually cut down on the use of certain objectionable words and phrases,” she said. “There’s no point in saying, ‘ooh, that blankety-blank I-4!’ when I-4 is the blankety-blank itself. It makes the use of modifiers redundant and unnecessary.”

She mentioned that the word is so infuriating that it can be used for a variety of purposes. “There’s no reason you couldn’t use it as a slur. For example, if you’re mad at your Jewish friend, you could say, ‘you know something, you’re being a real I-4 right now’ and they might not immediately know what you’re saying but they’ll know it isn’t good.”

“We’re not advocating that people do that, but just pointing out that they can.”

She went on to say, “And to be clear, we’re not saying people shouldn’t say I-4; they just need to know that like other dirty words, saying it in certain social circles is liable to be seen as highly offensive and could trigger violent reactions. Just like driving on it.”