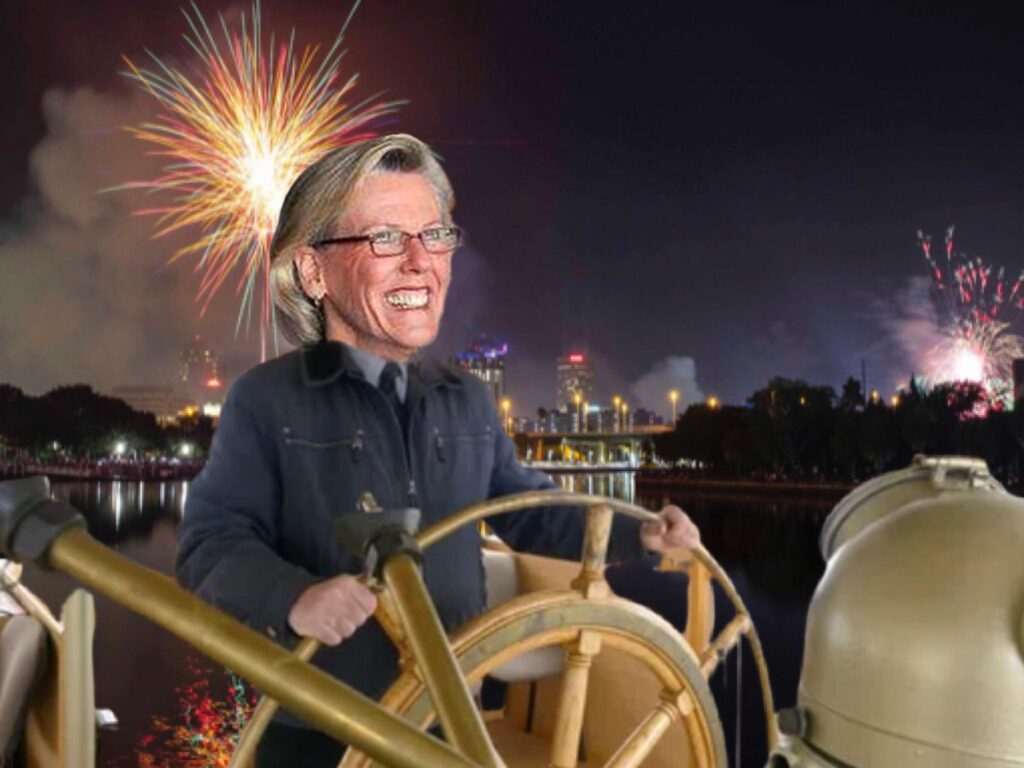 Jane Castor was a one woman show last night at Tampa’s “Boom By the Bay” Fourth of July firework show. The mayor manned the Hillsborough River barge all on her own. All the pyrotechnic folks were said to have “called off because they wanted to watch the show.”

The City of Tampa’s firework spectacular started 45 minutes late and was a torturous 45 minutes long. The show got off to a steady start of six fireworks per minute (FPM).

Some referred to it as the “intermittent fasting of fireworks displays.” The timing seemed to not have been worked out prior, as the firework blasts were sporadic and unpredictable.

The fit mayor navigated the barge frantically, running from set off site to set off site, stripping layers along the way. Sweat and panic overrode her normally cool demeanor. She cried for help as her body began to lose energy.

Finally, Jane recruited help from fellow boaters. Folks even took matters into their own hands and climbed to the highest points of the city to set off what they purchased for personal use. The Star Ship yacht set some off from each end of the boat while pontoons with various flags (Trump 2020, Trump 2024, Go Bolts) joined in. And then all drove away and came back and drove away and came back and drove away. Boaters left before Jane’s big finale, which people thought “would come any minute now.” Some people are still waiting.

Ashley Alchy of Dade City said, “my neighbors in Pasco County probably put on a better show. Those country mothereffers are way harder than these city slickers. I was gone off the White Claws, but some of the pauses in between blasts were so long that I literally thought it was over six or seven times.”

Comments from bystanders included:
“Make it stop”
“They were still going off by the time I got in bed at 7 the next morning. Jane was still running around the barge naked when I woke up.”
“NO.”
“Am I in hell?”
“Something is definitely wrong.”
“It felt like my first tour in Iraq.”
“That was weird.”

Luckily, a few blocks away at Curtis Hixon Park, the fireworks blasted off at record speeds. On Twitter, the city apologized for the inconvenience:

Amazingly, in total, one finger was lost in the chaos of it all. RIP Jane’s left pinky.