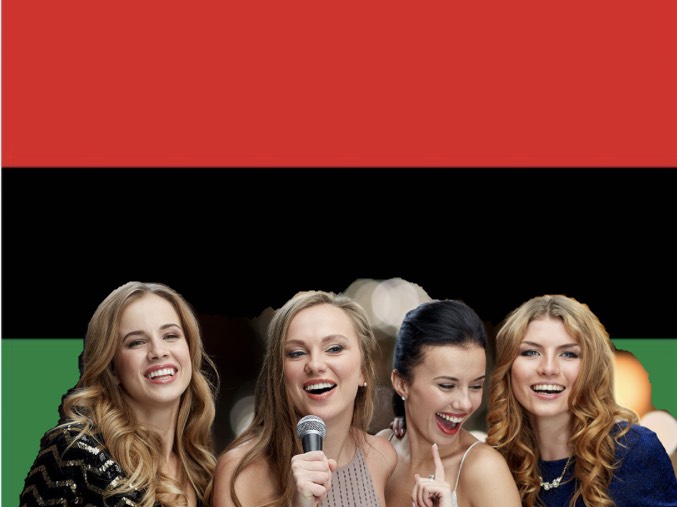 A group of women identifying themselves as “The Girls From Work” tried to pay tribute to Juneteenth with a karaoke performance at Glubber’s Pub in Clearwater Friday night.

By all accounts, the effort fell short.

“We go out for karaoke every Friday night after work, as a way of unwinding after a hard week,” says Kayleigh, one of the members of the group. “When we heard that today is also this brand-new holiday, we thought we should do something really special to celebrate it.”

Another member, Ashleigh said, “We did Journey’s ‘Don’t Stop Believing’ in the spirit of the holiday. I wanted to do Bon Jovi’s ‘Living on a Prayer’ because who doesn’t love Bon Jovi? But I was voted down.”

Juneteenth, also known as Freedom Day and Emancipation Day, commemorates Union army general Gordon Granger announcing federal orders in Galveston, Texas, on June 19, 1865, proclaiming that all people held as slaves in Texas were free. It was celebrated for the first time in 1867 in Austin, Texas.

“We come here every week and this is the first time we’ve ever been booed”, said Meighgan, another member. “In fact, I’ve never seen anybody get booed. that’s one of the key elements of karaoke etiquette: be supportive of all the participants.”

Witnesses say the booing capped a general feeling of unease that began when Deighna, the fourth member of the group took the stage and announced, “All right, I’m gonna need my girls up here with me for this one. Get up here, you guys! We gonna kick this Juneteenth Jam off! Wooo!”

Once all four were on stage together and the music started to play, she announced, “This one goes out to all the slaves out there! Because we’re all slaves. All of us! TGIF, everyone! And TGIJ too! Black Lives Matter! Woooo!” At that point, people went from shifting uncomfortably in their seats and visibly cringing to openly expressing genuine hostility. “This one guy threw an ashtray at us and it’s a no-smoking place”, says Kayleigh. “Someone said we were ‘tone deaf’ but they don’t know what they’re talking about; I was in Madrigals in high school. I can sing!”

Following the disastrous performance, the four tried to assess what went wrong. Ashleigh said, “You guys, I told you we should have invited Karen from accounts receivable.” “Karen”, clarified Meighgan confidently, “is a Black.” “You can’t say ‘a Black’”, replied Deighna, quietly, looking around to see if anyone heard. “You just say she’s ‘our Black friend’. It’s more inclusive.”

Reached for comment at her home pretty far away from Glubber’s, Karen from accounts receivable said, “Based on how they act around the office, that’s exactly how I would have guessed that would turn out. And as much as I kinda wish I’d seen it happen, I’m really glad I wasn’t there.”

In spite of the colossal failure, The Girls From Work remain surprisingly unaffected by the humiliating debacle. “If they have Juneteenth again next year, we’ll probably do something more appropriate. Maybe a song by Usher or Snoop Dogg. They’ll like that”, said Kayleigh. Ashleigh gasped and whispered, “Don’t say ‘they’!”