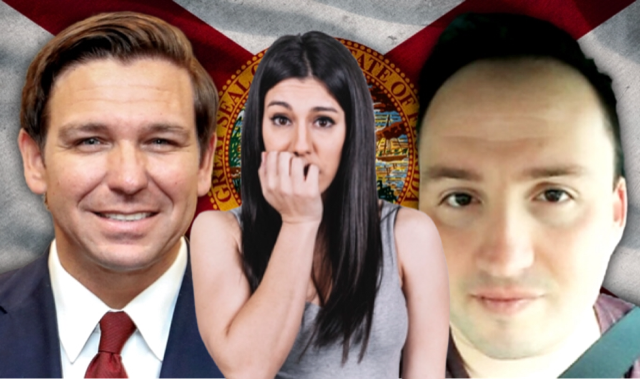 “She’s hot, isn’t she?” said Lamb, in lieu of a more professional introduction. “Ronny said I could have anyone I wanted so I picked her.”

Lamb was hand-chosen by DeSantis to head up the newly-formed ‘Endangering Floridians Through The Irresponsible Promotion Of Demonstrably Dangerous Bullshit’ task force.

“Kyle is a real go-getter”, said DeSantis. “That’s what I like about him. That, and the fact that he’ll bend the stats about the already-over yet somehow-ongoing pandemic whichever way I tell him because he’s as malleable as the Play Doh he looks like. I firmly believe he’s outkicking his coverage in terms of what he expects from this girl, but hey, good luck to him!”

Lindsay, whose Instagram caught Lamb’s attention, says she didn’t apply for the position and doesn’t want it. “It’s got nothing to do with my course of study. Plus, I’m not even slightly interested in spending any time around some creepy old man with an enormous and rapidly expanding forehead. Gross! Also, and this is important, so pay close attention; I DON’T LIE TO PEOPLE!”

Completely ignoring her points if not her words, Lamb said, “Nobody’s perfect. And I’ll train her. It’s easy. She’ll see.”

Referencing Lindsay’s credentials, Lamb said, “It’s true, she’s certainly not an expert. Fact is, I’m not an ‘expert’ either. I’m not a doctor, epidemiologist, virologist or scientist. I also don’t need to be. Experts don’t have all the answers. Plus, I’m not that old; I’m only 40.”

Lindsay replied, “So is my dad. Again, gross.”

“Doctors, epidemiologists, virologists, scientists aren’t smarter than everybody else just because their job titles are hard words to pronounce,” Lamb said. “I defy any red-blooded American heterosexual male, the only kind of man that matters, to ignore Ashley after catching a glimpse of her in a pair of yoga pants. Getting the suckers attention is the tricky part. The lying is easy.”

“She and I are going to work closely in further proving that face masks are ineffective, that Covid-19 deaths are comparable to deaths from the flu, and that hydroxychloroquine is a viable treatment for the hoax virus”, he then winked in an exaggerated and unsettling way and added, “very, very closely.”

“Anybody can offer anyone any job they want. That doesn’t mean they’re obligated to take it”, said Lindsay. “He can go to all the trouble of filling out the necessary paperwork to ‘hire’ me and even send me a check every two weeks if he wants to. I’m not taking that job, never listing it on a resume or ever even entering a room with that doughy, old, half-witted, paranoid, dangerously demented, narcissistic creeper. Once again, and I can’t state this emphatically enough: Gross!!”