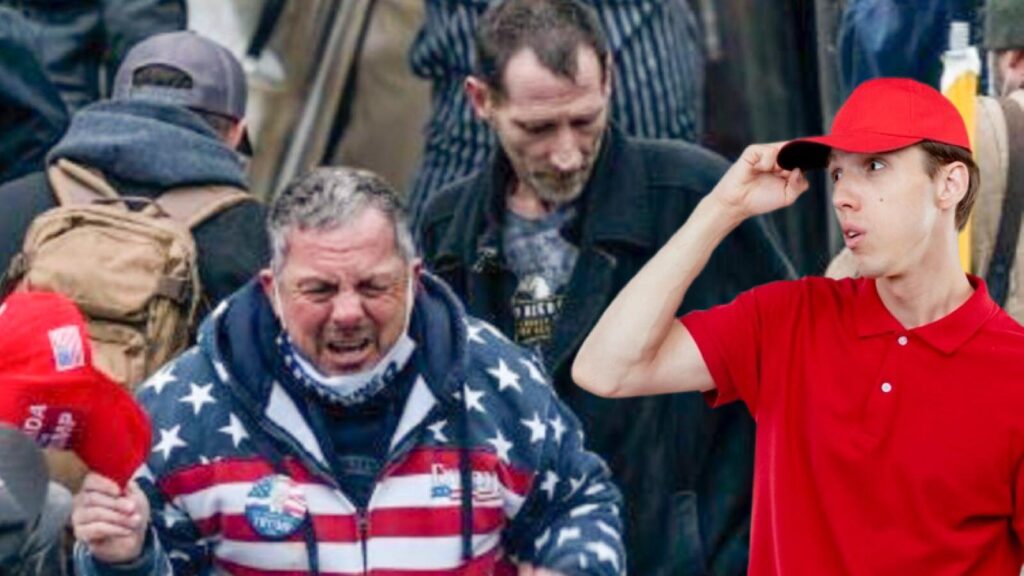 A Largo man who admitted he might have thrown a wood plank and sprayed and hurled a fire extinguisher at police officers during the Jan. 6 riot at the U.S. Capitol if he had been there is now glad that he realized the wrongfulness of those actions before they could even take place, according to a letter he wrote to authorities.

Brian Goover, who faces no charges because he turned around and went home instead of travelling over 1,000 miles to participate in the attempted insurrection, sent a lengthy handwritten note detailing exactly how he did not play a role in the attack that sought to subvert the results of the 2020 election.

“I was ready to go, me and my friend Robert Scott Palmer”, he wrote. “We had our MAGA hats, Robert was wearing his favorite stars-and-stripes hoodie and he was bringing his ‘BIDEN IS A PEDOPHILE’ sign that he had worked so hard on. We joked about whether it would fit in the plane’s overhead storage bin, hopped in the car and headed to Tampa International Airport to catch our flight to Washington. I was glad we were flying out of there because it really is just the best airport and I was ready to do my part to preserve democracy in this land that I love so much.”

The note states that he began to have doubts and misgivings less than ten minutes into the 19-mile trip.

“On the drive over to the airport, which is just so easily accessible, I started thinking, ‘what if maybe, just maybe, we’re being manipulated and lied to?’ They, the Trump administration and his fervent followers, could be spitting out a false narrative about a stolen election and how it was ‘our duty’ to stand up to tyranny. I began to think it was entirely possible that they were the tyrannical ones, desperate to hold onto power at any cost, even by creating the chaos they knew would happen with such rhetoric. It was something to at least take into serious consideration.”

“I decided then and there that I didn’t want to be the kind of person who would throw a wood plank and spray and hurl a fire extinguisher at police officers so I told him I was going home. He called me a pussy and I Ubered home. It cost me $35 and I never got a refund on my plane ticket but in retrospect, it was all totally worth it. I guess Robert got himself in some trouble up there. I can’t say that makes me sad, since I don’t like being called a pussy, but at least I’m not the one who got shot with rubber bullets and is now facing a five-year federal prison sentence. Dumbass. Anyway, I wanted to let you all know I really don’t even know that dude.”

He concluded the letter with, “Listen, don’t get me wrong; I still have major problems with the Biden administration and the general direction this country is headed in, but I realized there are more effective and appropriate ways to express my dissatisfaction than throwing a wood plank and spraying and hurling a fire extinguisher at police officers. Lots of other options, actually, that don’t result in possibly injuring police officers and getting my ass shot with rubber bullets and thrown in jail.”

“I’m just glad it took a short car ride and a pleasant, brief wait at the best airport in this glorious country of ours to realize that. God Bless America and God Bless Tampa International Airport.”