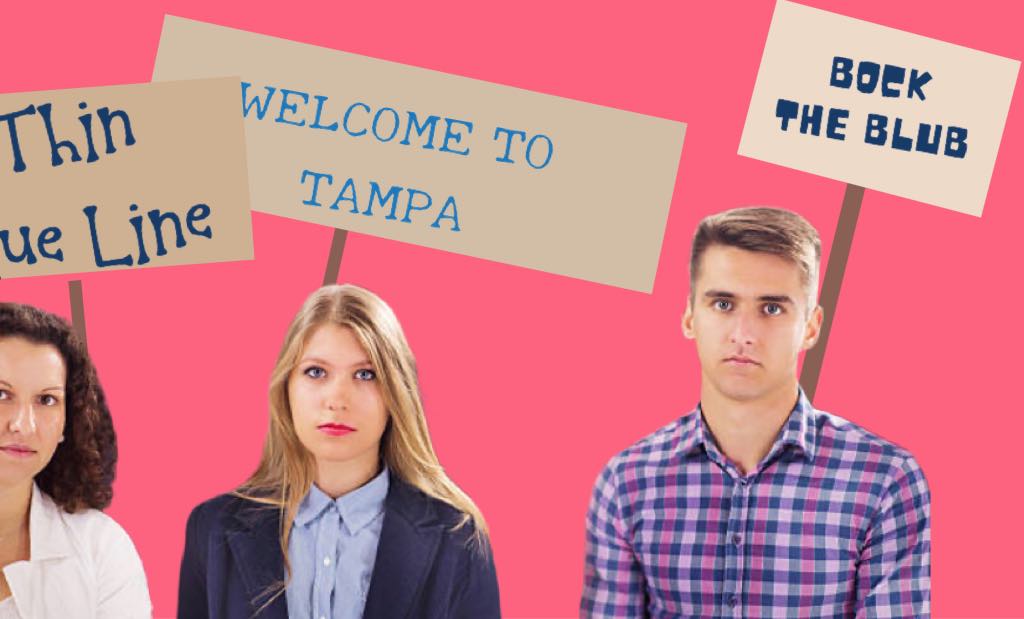 Following last Tuesday’s announcement that the U.S. Capitol Police will open a Tampa office (as well as one in San Francisco) to investigate threats, members of the Florida Back The Blue Facebook group appear to not be sure how to react.

“Hell yeah, more cops are always welcome here!”, said group organizer Kelli Campbell, setting up a welcome demonstration at Tampa International Airport. “I for one can not wait until they’re here and crackin’ skulls. About time some of these thugs learned a well-deserved lesson!”

Jeff Gorbe, another member of the group that was responsible for the controversial “Back The Blue” mural on East Madison Street outside of Tampa Police headquarters last summer, said, “Nobody should have a problem with this. If you’re a law-abiding citizen, that is.”

“Yeah, nothing to worry about, right?”, chimed in his wife Linda. “Nobody can violate your rights if you’re not doing anything wrong”, prompting spontaneous cheers and high fives from the rest of the group.

The remote branch in Tampa is opening to investigate threats to members of Congress, stemming from the attempted insurrection on January 6 at the Capitol building in Washington. The agency said, “At this time, Florida and California are where the majority of our potential threats are… A regional approach to investigating and prosecuting threats against members is important, so we will be working closely with the U.S. Attorney’s Offices in those locations. More field offices will be opening in the future,”

“Since that day (January 6), our team has been working with federal law enforcement agents to track down the suspects and bring them to justice. So far more than 500 defendants face charges…
The USCP has enhanced our staffing within our Dignitary Protection Division as well as coordinated for enhanced security for Members of Congress outside of the National Capitol Region. The Department is also in the process of opening Regional Field Offices in California and Florida with additional regions in the near future to investigate threats to Members of Congress.

U.S. Capitol Police in an email to The News Service of Florida

Upon learning this aspect, Campbell said, “Oh. Well, that’s… um… well… excuse me” and started rolling up the banners and signs she had posted as members of the group quietly dispersed and wandered off.

The Gorbes looked at each other, their mouths hanging open and their eyes blinking rapidly. “Jeff, honey? Isn’t that an overreach of authority, designed to restrict our individual freedoms?” asked Linda. “I… I don’t know”, replied Jeff.