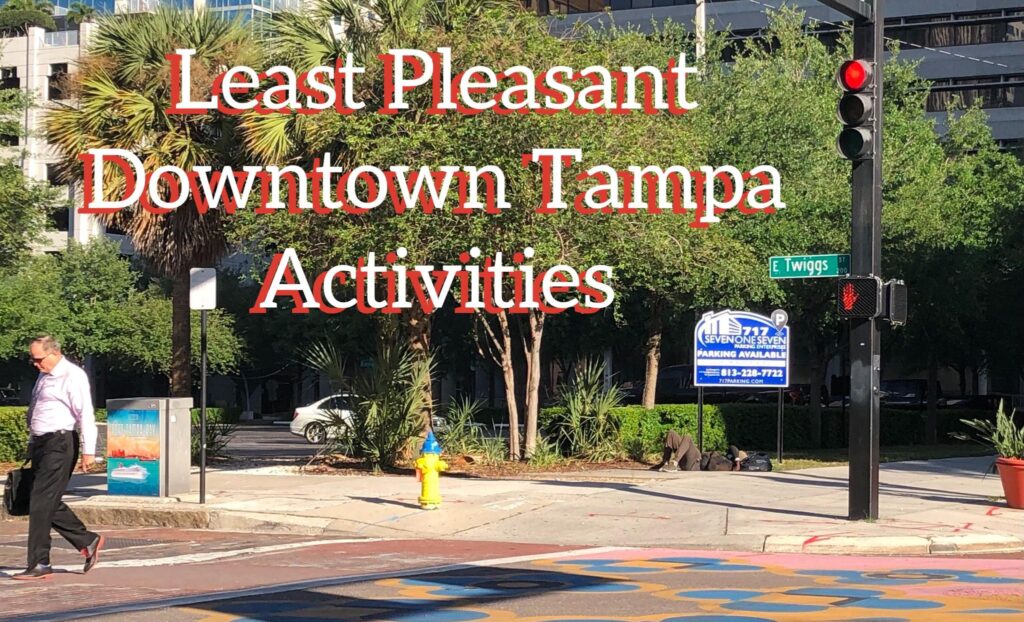 There are a number of things to do in downtown Tampa that are not enjoyable. The city is something of an engineering marvel in that most of these disagreeable pursuits are directly related to one another. The kind of synchronized inconvenience, lack of amenities and implications of potential menace required to be so unpleasant takes either very detailed advance planning or none whatsoever. You’ll see for yourself when you read our list of the Least Pleasant Downtown Tampa Activities.

5. Getting something to eat

There are more dining options downtown now than there were just a few years ago, a fact that would make most people ask, “Wow, so there weren’t any restaurants downtown?”. A question that any honest long-time resident could only answer with, “Yeah, basically.” These eateries span the quality gamut all the way from “not bad” to “I don’t feel well” with a few notable exceptions actually qualifying as “okay”, but they’re not really located within close proximity of one another. That’s a problem because as you’ll see below, exploring your options is not an easy task.

You’re liable to find more live entertainment on a Tuesday afternoon along Central Avenue in St. Petersburg than a holiday weekend Saturday night in downtown Tampa. Curtis Hixon Park is a tremendous outdoor venue, complete with a small amphitheater, ideally suited for live shows with a picturesque backdrop featuring the Hillsborough River and the minarets on top of Plant Hall at the University of Tampa. But unless there’s a major sporting event taking place or Tampa News Force is shooting a movie, nobody’s using it.

Most streets downtown have metered parking spaces at the reasonable rate of just $2.50 an hour. That would be great if the city didn’t arbitrarily block off large stretches of those spots near places people might actually want to visit. But don’t worry; 717 owns most of the surface parking lots and they’re more than happy to let you park there for the unreasonable rate of way more than $10 an hour while making zero effort to ensure nobody messes with you or your car.

Even just passing through, like if you’re too stupid to figure out a better way between Ybor or Brandon and Westshore or South Tampa or you’re just trying to get the hell out of there after a game or something, plan on it taking at least a half hour, due to the imaginative and whimsical timing of the traffic lights. You’re guaranteed to stop and sit at least four different intersections with no cross traffic whatsoever or your money back.

Busted sidewalks, high curbs, trash placed in front of businesses on purpose, block after block of abandoned storefronts and some of the scariest, most aggressive panhandlers you’re ever liable to encounter are a few reasons why just walking around downtown is the Number One Least Pleasant Downtown Activity for the 35th year in a row.

← Does smoking Spice cure Cancer?Healthy ways to do cocaine →