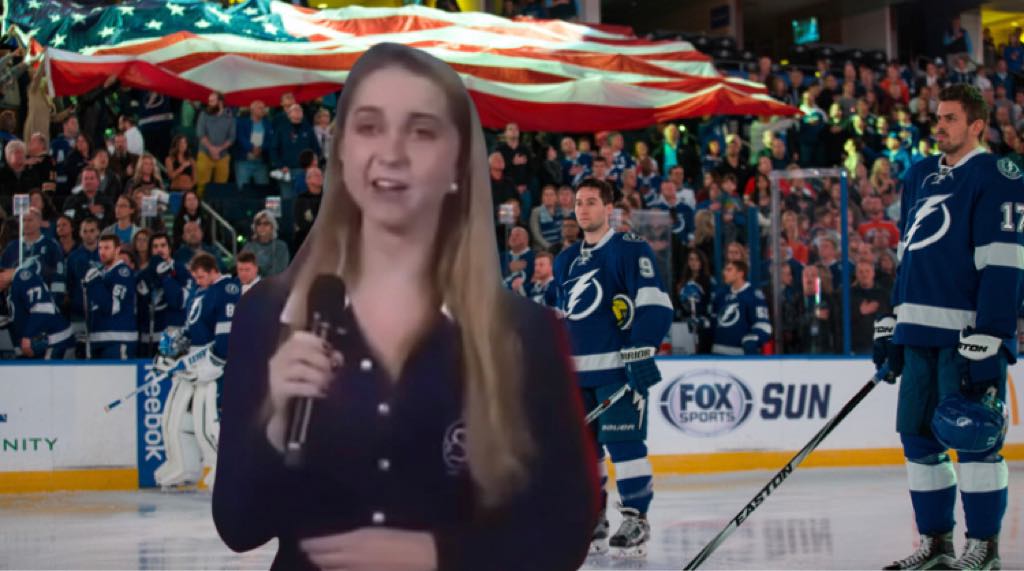 As Amalie Arena takes steps toward allowing fans back in to watch games played by the Tampa Bay Lightning and Toronto Raptors, a new protocol is being introduced in order to limit crowd sizes at hockey games.

“It’s all about keeping people safe”, said Jill Hlibbets, a Hillsborough County health department supervisor who is working with the arena to establish the process. “Yes, the situation is improving and we’re closer to people being able to resume some ‘normal’ activities. But we can’t just irresponsibly throw the doors open to everything and everybody with an arbitrary, all-encompassing edict. What are we; Texas? Ha ha! That’s just a little joke. No, we aren’t Texas. We’ve been Texas since September.”

In an effort to decrease public demand for access to Lightning games, the team will enlist 19-year-old UCF student Sailor Sabol to sing the Star Spangled Banner before home games.

Sabol performed the anthem at the 2021 Conservative Political Action Conference in Orlando last week, with a rendition that could most charitably be described as “interesting”.

“I love the Lightning. I’ve been a fan for years and I’d do anything to watch a game again”, said Don “Big Donny” Donaldson, a season ticket holder since the team’s inaugural season in 1992. “But, uh, I think I’ll pass. Thanks.”

“Are you kidding me?”, said Chelsea Molton, another long-time Lighting fan. “I’d rather be zapped in the tits by a Tesla coil than sit through two minutes of her tone-deaf screeching.”

“Why would they replace Sonya Bryson-Kirksey, one of the best anthem singers in all of sports with some completely talentless little hack who goes through more keys than a Nebraska Avenue motel with hourly rates? Unless they’re trying to inhibit the demand for tickets and they really just don’t want people to show up”, said long-time Lightning fan, Leslie Wilmington. “Oh wait, I get it now.”

The NBA’s Toronto Raptors, who are playing this season’s home games in Tampa due to Canadian travel restrictions, wanted to hire Sabol for the same purpose but she turned them down.

“We inquired but she refused on the grounds that she considers herself a patriot and would never support a communist regime and that she doesn’t even speak Canadian”, said Raptors president Masai Ujiri. “We were going to try to explain Canada to her but figured it wouldn’t be worth the effort. It’ll be fine; we’ll just rely on our mediocre record to keep local fan interest manageably low.”