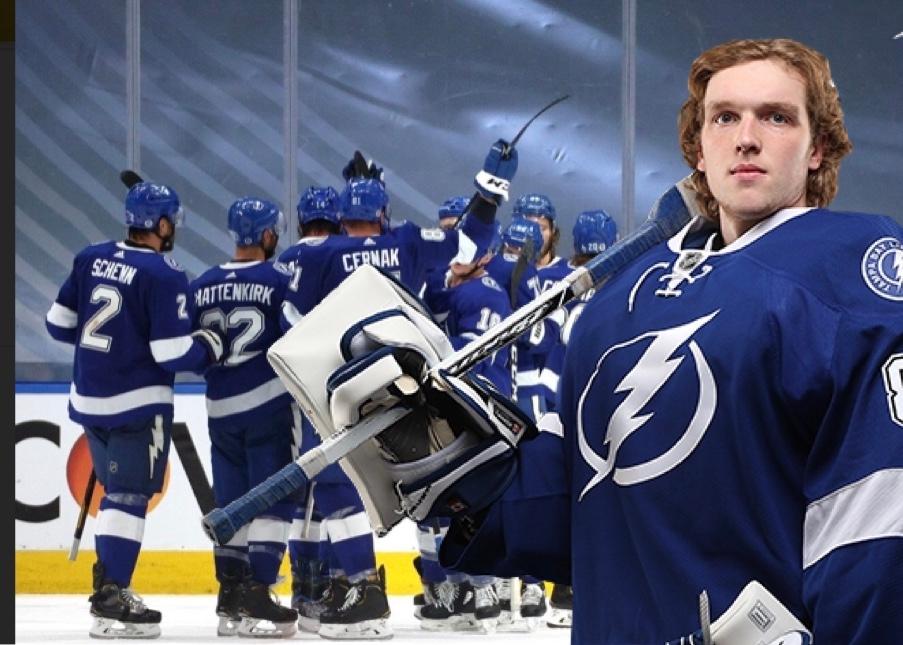 As the Tampa Bay Lightning prepare for Game 1 of the NHL’s Stanley Cup Finals against the Dallas Stars tomorrow night, goaltender Andrei Vasilevskiy has declared that he will no longer wear his protective goalie mask. “It’s a violation of my freedom, I think, and then also I just don’t think they work,” he says. “A lot of stuff says it does, but then some doesn’t.”

He says he’s come to this conclusion after doing his own independent research. “The truth is out there if you seek it from non-mainstream hockey media sites. It’s a conspiracy involving the NHL, Big Safety Equipment, YouTube, and Jacques Plante.”

“I’m sorry that anyone has to die ever, but that’s the reality of our lives. And I almost feel like if I’m going to get a severe head injury and die from it, then so be it,” he says. “Many, many more people die every year from head injuries in football.”

As far as other goalies do, he insists he’s anti-mandate, not anti-mask. “If you want to wear a mask, great. I will never look down on you, have anything bad to say to you, do what you want. But the mandates are what I disagree with and I don’t think are right, especially now,” he says.

He also feels that only do the masks not help but that they’re actually dangerous. “They make me breathe in my own carbon dioxide!” he says. “There are no other people whose occupations require them to wear a mask.”

Asked for his opinion on the matter, Victor Hedman says he doesn’t think it’s a good idea. “At this stage, the last thing we need is a distraction. I can’t imagine anything more distracting than watching our goalie’s head broken open like an over-ripe melon after taking a Jamie Benn slapshot to the face.”

Lightning back-up goalie Curtis McElhinney, who hasn’t played since a regular season start on March 8 in Detroit, supports Vasilevskiy’s stance. “If anybody in this league could play at an elite level without adequate head protection, it’s Vasy. And if he were to get injured, it’s not like we don’t have someone who could step in and play.”

Lightning head coach Jon Cooper isn’t too concerned about the situation at this point. “Listen, I will always back my players 100% when they feel strongly about something”, he says. “I just think he won’t feel that strongly about it after his first practice without the mask.”