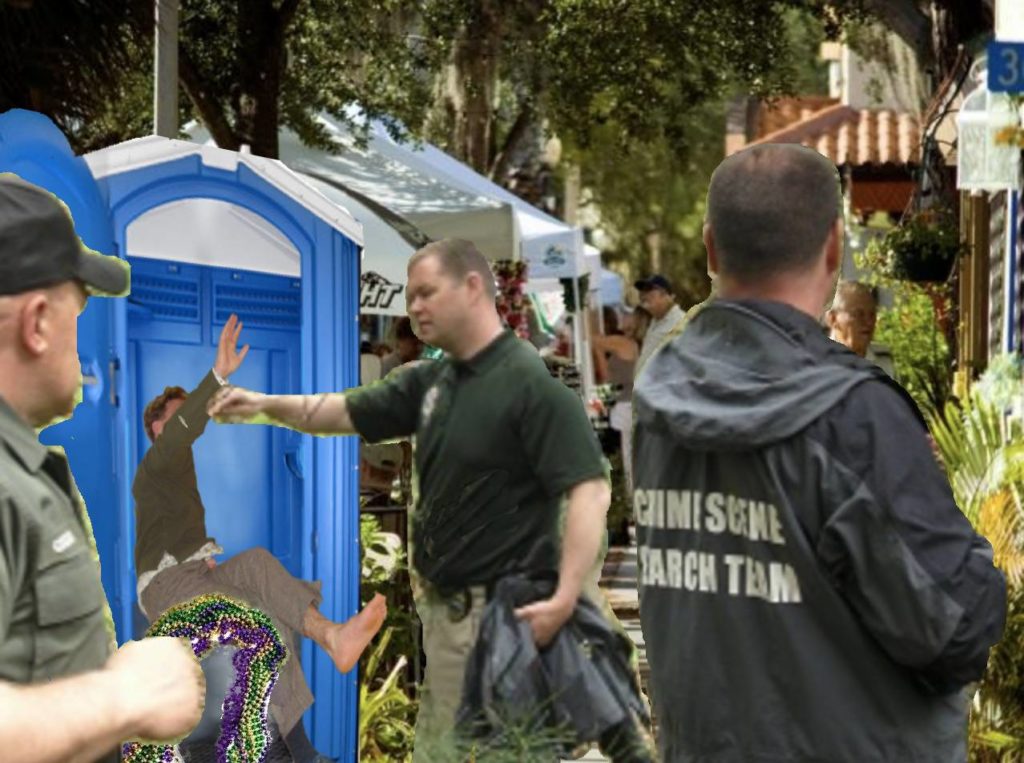 Missing USF student and Gasparilla celebrant, Brandon Chisney, has been found safe and sound in a portable toilet at an arts festival in nearby Gulfport.

“I had a tent at the festival, displaying my various pieces featuring stuffed sea birds nailed to driftwood”, says the man who found Chisney, artist Clive Munstache. “I went to take a quick tinkle-winkle, opened the door to the blue pee pod and there he was, sprawled out on the seat, wearing strings of beads and reeking of alcohol.”

Munstache reluctantly contacted emergency services. “Oh how I would have loved to have mounted him to a big piece of birch I have sitting in my studio. He’d have been my masterpiece. What a waste.”

Gary Weeters, manager of “Port-O-Plop, Inc”, the owners of the facility where Chisney was found says they supply toilet facilities to events all over the Bay Area.

“It’s a busy business. We’re constantly dropping them off here and there. One week, we’re serving Gasparilla, the next an art show in Gulfport. He musta climbed in there during one of the parades. We don’t always have a lot of turnaround time to hose ‘em out and whatnot. This was just one of those times. So sue me”, he said before quickly adding, “wait, not again.”

Chisney was in surprisingly good health, considering Gasparilla was several weeks ago. Doctors believe he survived by regaining brief periods of consciousness long enough to lick condensation off the wall and eat his own farts.

Chisney says his only regret is that the portable toilet was found in Gulfport and not at Plant City’s Strawberry Festival.   “Willie Nelson, man! Willie!!”