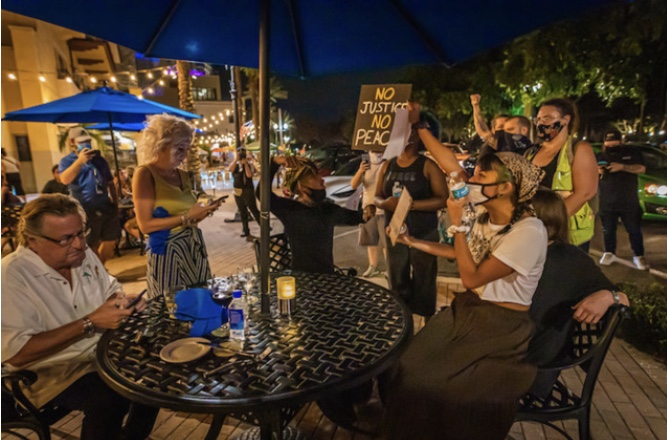 As protests continue in St. Petersburg, with more expected this weekend, Mayor Rick Kriseman is taking steps to lower tensions and minimize unpleasant confrontations between diners, protesters and counter-protesters.

“It’s perfectly understandable that people are outraged by the ongoing systemic racism in our society, as most recently evidenced by the outcome of the trial of the officers who murdered Breonna Taylor, in which the Kentucky Attorney General didn’t even seek murder charges. It makes sense that folks would want to get out and make their voices heard, as well as enjoy the beautiful weather and fine outdoor dining at some of our outstanding restaurants along Beach Drive”, he says. “With the Bay as a backdrop and temperatures expected to be in the 70’s, I can’t think of a more magnificent setting to have some Tandoori Spiced Mahi Mahi with Chorizo Roasted Corn Risotto, give people the finger and maybe pull a weapon on someone with whom I disagree philosophically. I get it!”

With all of those factors in mind, Kriseman is requesting that protestors and counter-protesters call dining establishments in advance to arrange seating. “The restaurants will do their best to seat you at or near a table with a party who will be uncomfortable, and maybe even threatened, by your uninvited presence, or even your very existence in the country. But showing up without making those arrangements beforehand makes it difficult for staff to accommodate all of their patrons”, he says. “It’s a matter of management, not censorship.”

He closed his remarks by saying, “I encourage everyone to get out there to peacefully exercise your constitutional rights and try the Baked Brie with berries, almonds and raspberry sauce at Moon Under Water. Like freedom, it’s to die for!”