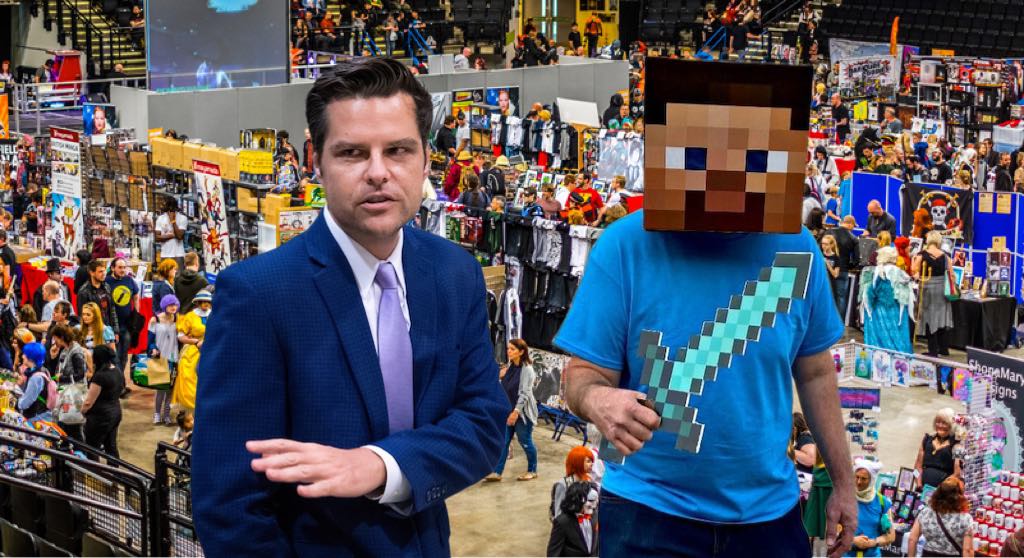 Jeff Coldblum of Bradenton was in Tampa to attend Tampa Bay Comic Con held at the Tampa Convention Center this past weekend where he was greeted with hostility due to people mistaking him for U.S. representative and probable human trafficker Matt Gaetz.

“They were so mean,” said Coldblum. “All these people getting in my face and saying just horrible things to me. ‘Get out of here, you lowlife’. Stuff like that and worse. It was awful.”

Coldblum was in costume as ‘Steve’, a character from the popular video game Minecraft at the time.

Gaetz, the controversial Republican representing Florida’s 1st congressional district, was in the news again recently when it was learned that he was caught on a hot mic in 2019, assuring veteran Republican operative Roger Stone that former President would pardon him if he were to be found guilty in his trial for the obstruction of a congressional investigation.

“Man, I hate that perverted piece of shit so much. I’d recognize him anywhere, especially in an environment where he would stick out, like a comic con where he could creep on kids,” said Matt LeBlink of Dunedin who was also attending the convention. “I almost kicked his ass right there, in the Ross Marquand autograph line.”

“Wait. That guy thought I was Matt Gaetz, the guy who says he ‘adopted’ a 12-year-old boy, even there’s no record of a legal adoption taking place?” asked Coldblum incredulously. “How is that possible? I mean, this guy’s confusion, not the adoption thing. But yeah, also the adoption thing.”

“I was obviously cosplaying a Minecraft character,” he said, pointing to the costume’s mask he was still wearing. “Look at the cross-eyed, vacant facial expression on my completely square head!”