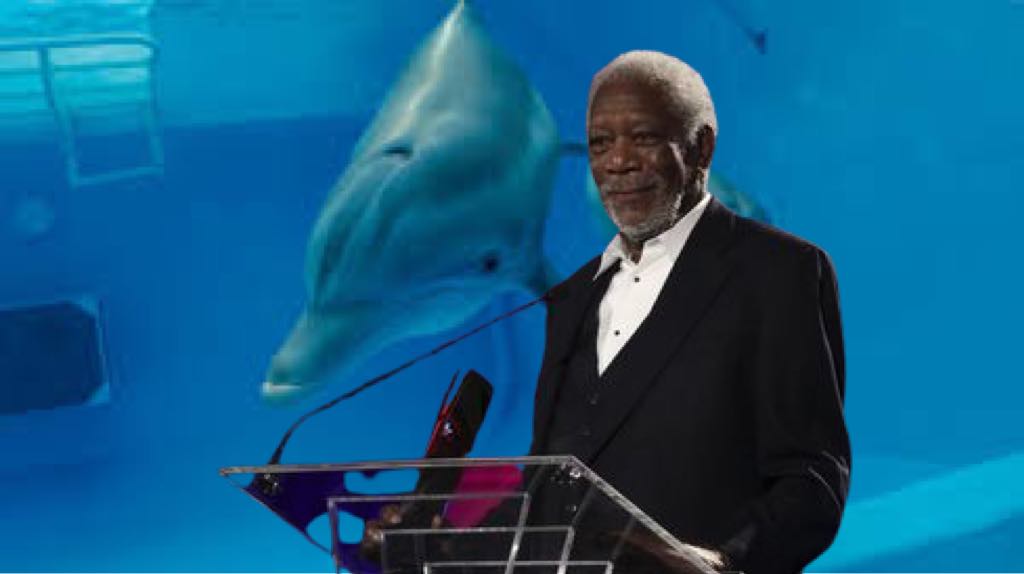 Morgan Freeman, star of the Dolphin Tale movie franchise will be paying respects to its star this week by speaking at Winter the dolphin’s funeral.

“I love that dolphin.” Said Freeman.

“I said it in the movie, and I mean it in real life.” He laughed, recollecting all the memories he shared with the handicapped dolphin.

“We used to smoke cigarettes on set,” Freeman happily reflected.

“I was smoking and Winter was squealing at me, and the trainer went, ‘he likes cigarettes,’ so I put one in his blow hole and he immediately loved it and I laughed and laughed.” Laughed Freeman.

“I let it drive my car.” Freeman exclaimed.

“One night I was too drunk after filming all day, so I just lifted that mother f***er right out of his tank and stuck him in the front seat of my Cadillac CTS. He drove that thing no problem!” Freeman slapped his knee.

“Sometimes I even fought with that son of a b****! Like physically!” Freeman emphasized.

“We’d have a long day of shooting, and he’d catch an attitude with me and I’d say ‘you bottle-nose f**k!’ And I’d punch him right in his nose, and he’d slap my head with his metal tail and we’d roll around on the ground for a while just beating the snot out of each other.” Freeman let out a big belly laugh.

“But it was all part of our relationship, we went through a lot together.” Freeman said, as he began rolling a home-made cigarette.

“Are those crushed elderberries?” I asked Freeman, pointing to the substance in the rolling papers.

With a slightly astonished look he pulled back.

“Yes, those are elderberries! You’ve got a good eye boy!” Freeman said, brushing me on the shoulder.

“Anyways, I won’t tell any of this juicy stuff I’m telling you at the funeral.” Freeman got back to holding court.

“It’ll all be Hallmark type stuff, you know ‘this dolphin was an amazing’ blah-blah-blah, all that generic s**t ya’ll are expecting from me. But that’s fine, that’s what people love to hear from me, so I dish it right out, cause that’s my meal ticket. My sweet appeal.” Freeman winked at me.

“Yea I understand what you’re saying.” I responded.

“Well thanks for letting me interview you for my story!” I thanked Mr. Freeman, and began to exit his trailer.

“No problem kid, hey do a turn for me real quick.” He said.

“Like this?” I asked, twirling in a circle while his eyes twinkled.

“Winter used to do it just like that. I miss that dolphin. Now get out of my trailer.”