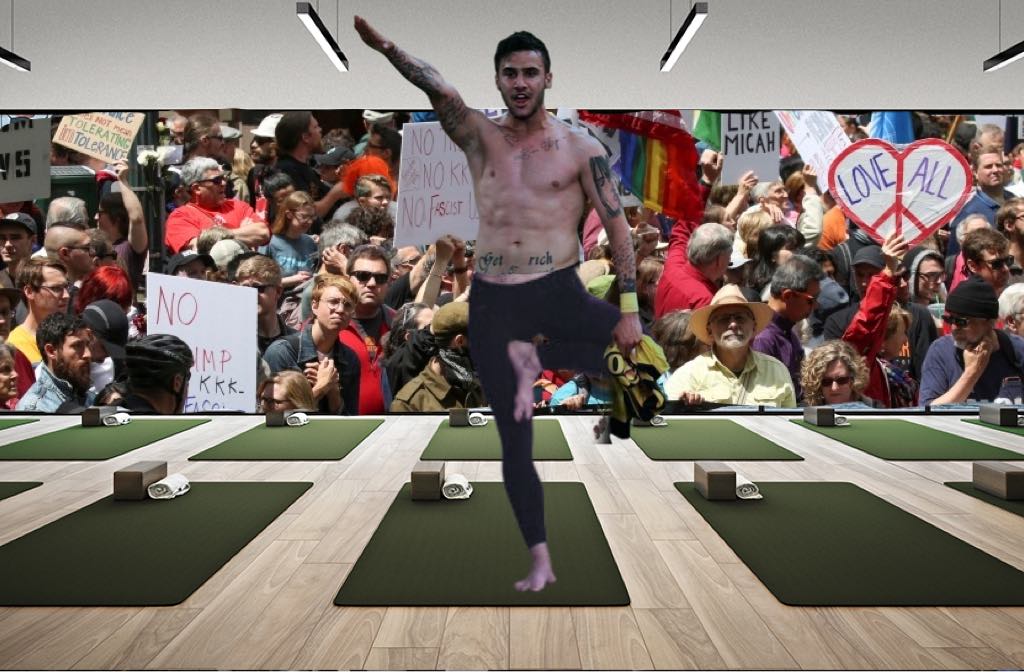 The first night of Nazi Yoga at Zeitgeist Brewing in Brandon ended shortly after it began when a group of people showed up and began attacking everyone taking place in class.

“Nazi Yoga” which was, in theory, a Nazi-themed yoga class, which focused on poses including the famous Sieg Heil, made famous by the German Nazi party during World War 2.

The class was being put on by Alabaster Nacho, a self-titled “Hitler enthusiast” who had gotten permission from Zeitgeist Brewing to host a Nazi Yoga class on the first Monday night of the month.

Within mere moments of the first class beginning, an overpowering group of angry people shut it down, violently attacking the few people who had actually shown up for the class.

“I thought it might ruffle a few feathers, but I didn’t think it would be this bad.” Said Nacho, who was currently holding a frozen bag of peas over his bleeding eye socket, as blood dripped from his thick beard onto his clown shoes.

“I figured it would drum up some business for the brewery, and give me an opportunity to share some of my Nazi fun facts, but yea, this went much worse than I imagined. I thought it would be light-hearted and people would sort of understand the irony, I mean, I’m a fan of Hitler, but I don’t actively hate Jews, I was just infatuated by the guy’s moxy and chutzpah. I did not imagine that I would have both of my elbows dislocated and a stranger would stab me through the nose with a cufflink.” Nacho continued as he began swaying and losing consciousness from the blood loss.

“Hey, are you friends with that guy!” An angry man yelled at me while I was interviewing Nacho.

“No. I’m just a journalist, interviewing him on what happened.” I responded.

“Don’t f***ing talk to that guy!” The man yelled at me, as he began pacing towards me.

I ran away as quickly as I could as I shouted, “I was just doing my job! I didn’t do anything!”

Zeitgeist has released a statement saying they are “Sorry for the misunderstanding” and that they “did not mean any harm” by hosting Nazi Yoga.

“We don’t think that was a fair first try, so we’re going to be giving Nazi Yoga one more chance on the first Monday of next month, so if you would like to come out for a pint and a goose step, first beer is half-off if you’re attending the class.”