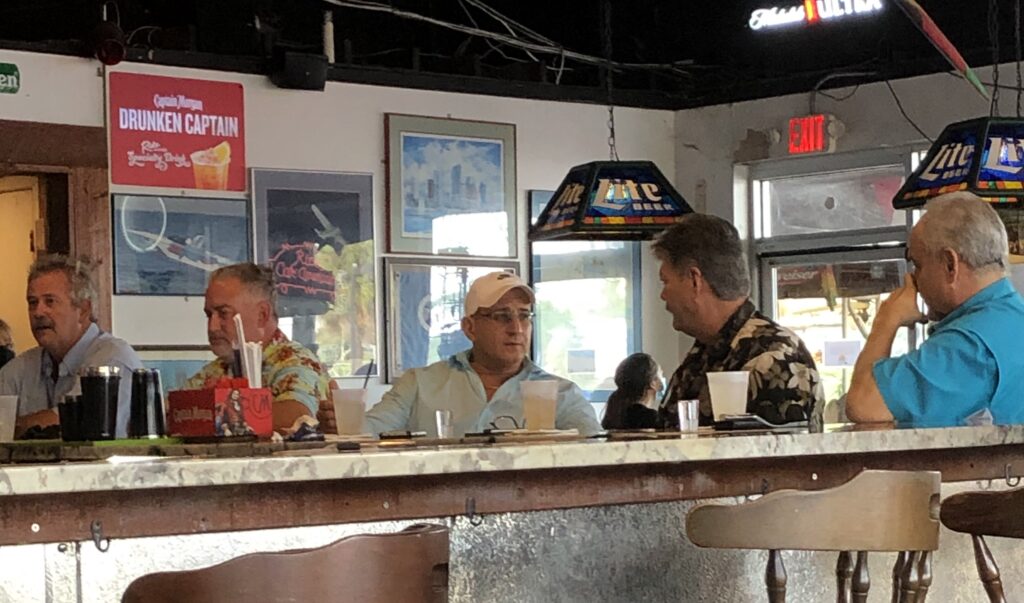 A group of potential troublemakers has been spotted holding meetings at a popular Tampa gathering spot and authorities are concerned.

“They haven’t actually done anything noteworthy… yet”, says Tampa Bay FBI Field Supervisor Agent Espi Onaje. “But we’re keeping an eye on them and we’ll make our move if and when the situation escalates. Americans and Tampa residents can sleep well at night, knowing we’re on the case and looking through their windows while they sleep at night. Figuratively, of course. Ha ha! We intercept emails and cell phone chatter and use drones to keep visual tabs on subjects. We don’t actually peek in people’s windows anymore. Well, sometimes we do. I do, anyway. Mostly, just me. I like it.”

The group members all seem to fit a similar profile: Caucasian males between the ages of 55 and 65. They also appear to have uniforms of a sort, consisting of shirts from Columbia Sportswear, or with floral “Hawaiian” style prints, with khaki cargo shorts and mustaches, accompanied sometimes with baseball-style caps adorned with a variety of non-baseball team insignias on them. They meet regularly on weekends, usually during televised football games, at Rick’s on the River in Tampa. “We think they might also enjoy Jimmy Buffet music but we’ve yet to confirm that”, says Agent Onaje.

“We’re referring to them internally as The Boomer Bois or The Dad Bod Squad, but they address each other with very clever code names so we can’t pin down their actual identities”, says Agent Onaje. “Ted, Dave, Bill, Pete and Other Dave. We have no idea what those names really mean.” When it was suggested that those might just be the given names of those individuals, he scoffed, said, “Why don’t you leave the surveillance business to the experts, okay?”, and then pulled out a notebook and quickly wrote something down.

I asked him what activities the group was suspected of participating in, political or social or something else? “We’re not sure yet,” he said. “Sometimes they comment quietly among themselves about a server’s ‘rack’ when she’s not there to hear it, so we’re pretty sure they’re either antifeminists or ultra-ironic feminists. Also, they refer to lite beer as ‘pisswater’. Probably code for something. I don’t believe it’s actually urine.” As far as political leanings, he says the group frequently argues among themselves about liberal and conservative ideologies, with none of them maintaining a consistent opinion on any one issue. “The same goes for their discussions about sports in the 80’s and the music of Pink Floyd and Bob Seger. It’s very difficult to figure out where they stand on anything really. We’re not sure whether or not they’re racists but all of them are white so we’re pretty sure they’re racists.”

I mentioned to him that I couldn’t help but think this might just be a bunch of harmless old dude drinking buddies and this entire investigation could just be a huge waste of time and money. He looked around to see who was nearby and leaned in to whisper, “All right, I’m going to tell you this next part as an anonymous source, okay?” I tried to tell him I already knew his name and had listed it previously in the article but he interrupted me. “We’re coming up on the end of the year and we have a budget surplus we have to get rid of. We’re maxed out on spying on minorities, so it’s these guys for the foreseeable future. Shhhhhhhh!”